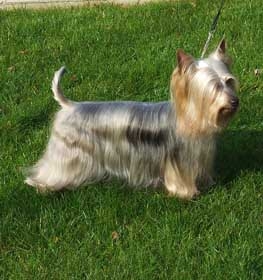 Collection of all the general dog breed info about Silky Terrier so you can get to know the breed more.

The Silky Terrier can trace back its origins to Australia, to the 1890s, when dog breeders imported the Yorkshire Terrier and then crossed with their native Australian Terriers. This large-scale resemblance is the reason why, it is really easy for the casual dog owner not to be able to make a clear distinction or to not recognize properly the Silky, the Australian, and the Yorkshire Terriers at first glance.

Australian Terriers and Yorkshire Terriers were the main ingredients used by Australian breeders when developing the Silky Terrier at the beginning of the 20th century. Some of the offsprings looked like the Australian and some resembled more like the Yorkshire Terriers, consequently, the breed was not homogenous at that stage, because of their various sizes and coats. Then, as a solution, Silky-looking puppies were interbred with other Silky-looking ones, until the result was a distinct dog breed, with their unique traits and distinguishing marks. Nonetheless, other breeds were involved in the Silky’s creation process including the Cairn, Skye Terriers, and the Dandie Dinmont, these three breeds were imported to Australia by English immigrants and settlers.

The Silky Terrier’s Australian fanciers have drawn up a standard for the breed in 1906, in Sydney, South Wales. However, in Victoria, another standard was described three years later, in 1909. These two standards did not fully match, they did not agree on the preferred weight and ear type. The conflict between the two camps was eventually resolved in 1926 when a third, final standard was determined, thus the two standards finally condensed into one. Throughout the breed’s evolution, the Silky Terrier had several other names, initially, it was called the Sydney Silky Terrier, yet it became the Australian Silky Terrier in 1955, but in the United States of America, the dogs’ name was changed into Silky Terrier.