How to use the dog chocolate toxicity calculator? Enter the weight of your dog, select the type of chocolate, and its amount.

Why is chocolate bad for dogs?

Chocolate is harmful to our dog’s health because it contains a little caffeine and a lot from a chemical called theobromine, which is similar to it. Both chemicals are poisonous for dogs(and cats as well) and used medicinally as a diuretic, heart stimulant, blood vessel dilator, and a smooth muscle relaxant for humans.

Unlike humans, most pets' s but especially dogs' organs can’t metabolize theobromine so easily. They process it much more slowly, which makes them more sensitive to the chemicals’ effects and can easily build up to toxic levels in their system it is very toxic for their nervous system as well. With large amounts, theobromine can produce muscle tremors, seizures, an irregular heartbeat, internal bleeding, or a heart attack. The onset of theobromine poisoning is usually also marked by restlessness. 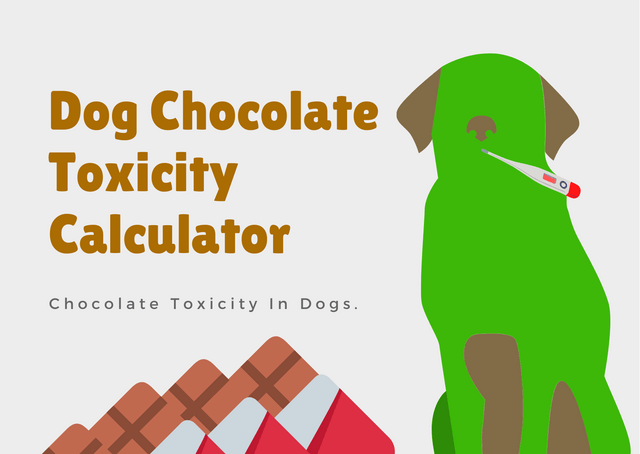 The highest level of theobromine and caffeine is in dark chocolate and baking chocolate that means it takes only a very small amount to poison a dog.

Less than an ounce of dark chocolate may be enough to poison a 44-pound dog. While dark chocolates can contain about 400 mg of theobromine/ounce a bar of regular milk chocolate contains about 50 mg and white chocolates approximately 0.25mg/ounce. To cut a long story short the chocolate’s toxicity is getting more and more as it gets darker.

A small amount of chocolate will probably only give your pet an upset stomach with symptoms such as vomiting or diarrhea. At doses over 50 mg /kg cardiac signs and symptoms, such as a racing heart rate, high blood pressure, or heart arrhythmias neurologic signs can be seen, including tremors, twitching can occur.

You have to go to the veterinarian immediately if the dog has ingested that much chocolate because they need emergency care, in this case. To help you forecast how much danger your dog is in, we developed a chocolate toxicity calculator. Based on the type and amount of chocolate ingested.

As it is mentioned above, the symptoms are depending on the amount and type of chocolate our dog has eaten. The precondition of the dog is also determining (dogs with heart-related disorders will need emergency care even after they have eaten only one slab of chocolate ). The size and weight of the dog are also influential variables. (A large dog can consume more chocolate than a small dog before suffering ill effects). But vomiting, diarrhea, increased thirst, hyperactivity, excessive urination, and a racing heart rate are common symptoms of theobromine poisoning.

In more serious cases, (at doses over 50 mg/ kg ) they can experience muscle tremors, seizures, and heart failure as well. A larger amount of dark chocolate especially for pets with pre-existing heart disease can even cause cardiac arrest and sudden death. These signs can take several hours to develop and can last for days, due to the long half-life of theobromine, so that is where the chocolate toxicity calculator is needed the most even if you haven’t sensed any of the symptoms listed above on your dog, but recognize missing chocolate, you can calculate how serious the situation is.

The sooner the theobromine is removed from the body or the dog is stabilized, the better your dog’s prognosis, so take your pet to the veterinary as soon as possible

The proper treatment is of course dependent on the amount of theobromine and caffeine in their system. Administration of activated charcoal to block absorption of theobromine into the body and the getting medications to induce vomiting. So the removal of theobromine from the stomach with proper medication can be enough help if it is treated early so it is always advisable to take the dog to the veterinarian immediately if you recognized any symptoms or have a reason to suppose they have ingested any. It takes a minimum of three days to fully recover.

To reduce the continued resorption and recirculation of theobromine activated charcoal may be administered every four to six hours for the first twenty-four hours. In case of larger doses ingested or late recognition, support treatments may also be needed e.g.: intravenous fluid therapy to help stabilize your dog and promote theobromine excretion. Sometimes medications to slow the heart rate may be necessary too to treat the elevated heart rate and arrhythmia.

How about dog bakeries? Don’t they use chocolate for the treats?

Many gourmet dog treats use carob as a chocolate substitute, which is very similar to and often confused with chocolate. Carob is not dangerous for dogs at all, they can perfectly digest without any problem. Some specialty dog bakeries do use a small amount of milk chocolate in their treats but of course, in the types, they use the amount of theobromine is typically low. So however veterinaries suggest avoiding chocolate totally, in order to preserve your dog’s health eating those may harm your dog.

Q: Is chocolate toxic for dogs?

A: Yes, chocolate is toxic for dogs. Chocolate digestion can result in significant illnesses and in rare cases it can also be fatal.

Q: How much chocolate is toxic for a dog?

A: There are no dogs capable to metabolize chocolate, thus even the smallest amount of chocolate has negative effects on their health. However, the severity of the toxicity depends greatly on the amount of chocolate eaten and the type of breed. On average, dogs show symptoms of poisoning when they eat 20mg for every kilogram (0,5 ounces for every pound) they weigh. The severity of the symptoms increases as the number of chocolate increases. 40 – 50mg per kilo can cause severe health risks.

Q: Is there a difference between dark, and milk chocolate when it comes to dog poisoning?

Q: Why is chocolate toxic for dogs?

A: Chocolate is toxic for dogs because it contains a chemical called theobromine and also caffeine. Dogs are not able to metabolize theobromine nor caffeine effectively as people can. This makes them more sensitive to the chemical effects.

Q: How long does it take for a dog to get sick after eating chocolate?

A: Symptoms of chocolate poisoning usually will manifest within 6 to 12 hours after eating it. In severe cases, symptoms can appear even after 1 hour.

Q: How long does chocolate poisoning last for dogs?

A: In mild cases, chocolate poisoning can cause sickness lasting for only one day, or only for ten hours. In severe cases, it can take up until three days for the theobromine and for the caffeine to disappear from the body.

Q: How long does it take to get the chocolate out of the dog’s system?

Q: Can a dog recover from chocolate poisoning?

A: The recovery after chocolate poisoning significantly depends on the amount ingested by the dog. In severe cases, the dog may eventually develop convulsions along with the other symptoms and die. Yet, in the majority of the cases, the dog can be saved, either by the owner, if the chocolate intake was very small, or by the vet.

Q: What is the treatment for chocolate toxication for dogs?

A: The treatment procedure mostly depends on the amount and type of chocolate eaten by the dog. If treated early, the removal of the piece of chocolate from the stomach by administration of activated charcoal to block absorption of theobromine or by inducing vomiting may be all that is necessary. However, if the chocolate poisoning is severe and happened multiple hours ago, the owner should check in with the veterinarian.

Q: What can I give my dog after eating chocolate?

A: You should give the dog a teaspoon of hydrogen peroxide mixed with water, or with dog-friendly ice cream in order to make it easier to swallow. Then, you should get your dog moving around. In case the dog does not vomit within half an hour, you should take him to the veterinarian and do not give him/her any more hydrogen peroxide.

Q: What are the symptoms of chocolate poisoning for dogs?

A: The severity of the clinical symptoms greatly depends on the amount of chocolate ingested. For many dogs, the most commonly appearing signs of chocolate poisoning include diarrhea, vomiting, increased thirst, excessive urination, increased heart rate, and restlessness. In case of severe poisoning, the symptoms are seizures, muscle thermos, and even heart failure can be seen.

Q: Is chocolate deadly for dogs?

A: Chocolate is toxic for dogs. Meanwhile, chocolate poisoning is rarely fatal, the ingestion can result in significant health risks and later developed illnesses.

Q: Should I make my dog vomit after eating chocolate?

A: Even if the consumption of chocolate is not totally sure, but the owner finds suspicious evidence like candy wrappers, it is a good idea to get the pet to vomit. However, it can also be dangerous to induce vomiting, in case the dog is acting lethargic or it is otherwise sick or dehydrated.