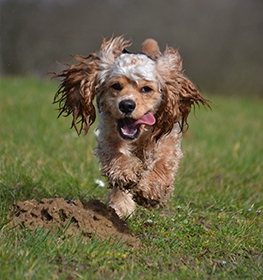 Collection of all the general dog breed info about American Cocker Spaniel so you can get to know the breed more.

The American Cocker Spaniel is a member of the large group of Spaniels originating from antiquity. The word “spaniel” translates to “Spanish dog”, thus it is widely accepted that the Spaniel breeds find their origins in Spain. Due to the breed’s long history, and early emergence, there is not much historical evidence, nor documentation regarding the American Cocker Spaniel’s ancestry. Nevertheless, the breed is considered to have been descended from other Spaniel breeds, including the English Toy Spaniel and the English Springer Spaniel.

Many dog breeds were slow to cross the Atlantic Ocean, yet the Spaniels had been well-known and represented in the United States for centuries. In 1620, the first Pilgrims left Plymouth for the New World, carrying a small Spaniel on the Mayflower, making him the first European dog on American soil. By the late 19th century, the Spaniels were separated into two groups regarding their function: the companion and the hunter dogs. Later on, the hunting Spaniels were also divided into land and water hunting breeds. The Cocker Spaniel is thought to be named after its excellent hunting abilities against woodcock. Despite the breed’s early presence, it was much later, in 1878 that a liver-and-white coated Cocker Spaniel, named Captain was registered by the AKC (American Kennel Club). However, there was no distinction between the American and the English variety yet. In 1881, James Watson and Clinton Wilmerding founded the American Spaniel Club, which is the oldest breed club in the United States, and it initially included many types of Spaniels. Eventually, as more and more Spaniel breeds got their distinct breed standard, and their differences got refined, breeders and club members started to split into separate organizations. Meanwhile, back in England, the first kennel to gain recognition for the Cocker Spaniel as a separate Spaniel breed was the Obo Kennel of Mr. James Farrow, in 1892.

How old is my American Cocker Spaniel in human years?

Sharing is caring.
Help our free service by spreading information about dog breeds.
Link to this: American Cocker Spaniel Breed Information
<a href="https://dogell.com/en/dog-breed/american-cocker-spaniel">American Cocker Spaniel Breed Information</a>
Despite the best intentions, there may be errors. If you find one, please let us know and we will fix it as soon as possible. Contact us here.