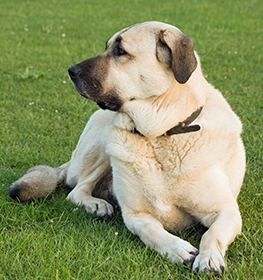 Collection of all the general dog breed info about Anatolian Shepherd Dog so you can get to know the breed more.

The Anatolian Shepherd Dog’s name already suggests their place of initial development, Anatolia, in the central part of Turkey. The breed’s ancestors were thought to have been working alongside humans for at least the last 6,000 years, thus it is safe to say, that the breed’s history is quite a long one.

Presumably, the wandering tribes originating from Central Asia, migrating to Europe brought the first mastiff-type of dogs to the region, we now know as Turkey. The breed’s initial creation is considered to be natural. It is also thought that sighthound breeds from the southern regions contributed to the Anatolian Shepherd Dog’s aloof character, agility, and long ears. Because of the changing, yet harsh climate conditions and the varieties of the terrain of the environment surrounding the local population, people developed a nomadic way of life, dependent on flocks of goats and sheep. The agricultural activity in the area has long been wedged by the predators including wolves, who caused significant losses on the smaller flocks over the course of a year. Consequently, these nomadic tribes needed protection in order to preserve their base of nutrition, their flocks, so they started to use these local shepherd dogs. These large dogs traveled with the tribes, helped the tribes’ herd, and shepherd the livestock while deterring any predators from the flock. Thanks to the breed’s large size, aggressive and territorial nature, the tribes were satisfied with the dogs and started to breed them. Regarding the material findings of the breed, ancient artifacts from the Babylonian Empire document the breed’s ancestors. The Assyrian bas-relief cravings from 2,000 B.C., portray large dogs resembling the Anatolian Shepherd Dog. The earliest books of the Bible also refer to shepherds whose dogs were presumably some local variations of the same breed.

The Anatolian Shepherd Dog’s history in the United States started at the beginning of the Second World War, when the Department of Agriculture brought a breeding pair from Turkey to the States, within the top-secret military project called, “Sheepdog Project”. The program’s intention was to determine which breeds would serve best on the American sheep pastures. However, with the outbreak of the war, the Anatolian dogs and their offspring were dispersed, and the project got discontinued. After the war, in the 1950s, American farmers and ranchers began to import the breed. Thus, the breed’s population numbers started to increase until the 1970s. A man named Lieutenant Robert Ballard from the U.S. Navy is credited with the firm establishment of the Anatolian Shepherd Dog in the States. He acquired a pair of the breed’s specimens while being stationed in Turkey. He brought the puppies with him to his Californian home and bred the first litter in 1970, which became later known as the foundation litter of the breed in the United States. This new breeding program coincided with the passage of the Endangered Species Act, under which ranchers were required to control the population of predatory wolves without killing them. Fortunately, the Anatolian Shepherd Dog had many experiences in the field, thus the breed perfectly suited for the job.

The AKC (American Kennel Club) recognized the Anatolian Shepherd Dog in 1996. The breed also made appearances in Hollywood movies including, ‘Kate and Leopold’ and ‘Friends with Benefits’. Today, dogs are still employed in farms and ranches. The Anatolian Shepherd Dog is also helping the Cheetah Conservation efforts in Namibia since 1994. The program encourages African ranchers to use the dogs to protect their livestock, so they do not have to kill the endangered cheetahs.

How old is my Anatolian Shepherd Dog in human years?

Sharing is caring.
Help our free service by spreading information about dog breeds.
Link to this: Anatolian Shepherd Dog Breed Information
<a href="https://dogell.com/en/dog-breed/anatolian-shepherd-dog">Anatolian Shepherd Dog Breed Information</a>
Despite the best intentions, there may be errors. If you find one, please let us know and we will fix it as soon as possible. Contact us here.