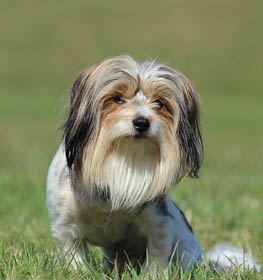 Collection of all the general dog breed info about Biewer Terrier so you can get to know the breed more.

Biewer Terrier As a Working Dog

The Biewer Terrier, or in its other names, the Biewer Yorkshire, or the Biewer à la Pom Pon is a purebred terrier breed, which bears significant resemblance to the well-known Yorkshire Terrier.

Interestingly, as opposed to many breeds, the Biewer Terrier’s origin and development process are exactly known. The breed can trace its origins back to the 20th of January, in 1984, back to Hunstruck in Germany. By that point, Werner and Gertrude Biewer were well-renewed Yorkshire Terrier breeders. The couple had a very successful and huge breeding program throughout the 1970s and 1980s in Germany. Then, one day, after crossing two Yorkshire Terrier specimens with recessive piebald genes, the Biewer Terrier was born. The couple only stumbled upon the fact that their Yorkshire Terriers had this piebald recessive gene after the litter was born. For the reason that this recessive piebald gene cannot be found in Yorkshire Terrier specimens, very often.

The first documented puppy was named Schneeflockchen von Friedheck, and he was colored black, white, and tan. Three months later, in April, another black, white, and tan puppy was born, and they named her, Schneeman. It is thought that these two puppies are the two-parent ancestors of the Biewer Terrier. These two puppies were the only ones, who inherited this rare and unique recessive piebald gene. During one of the couple’s vet visits, their veterinarian, named Dr. Bardeleben, suggested that they name this newly created terrier breed “Gertrud Biewer Yorkshire Terrier”, after Mrs. Biewer. According to the documentation, both of the first Biewer Terrier specimens were sold to a famous German singer at the time, named Margot Eskens. She was the one who proposed that the breeders should add “á la Pom Pon” to the breed’s name. The breed had its official introduction to the general public in 1986, under the name, Biewer Yorkshire Terrier a la Pom Pon.

By the turn of the century, the Biewer Terrier’s popularity decreased in its native country, Germany. Furthermore, the number of breeders also declined significantly. Nevertheless, as the breed got exported to the United States of America during the early 2000s, their popularity had been restored. In 2014, the AKC (American Kennel Club) accepted the Biewer Terrier into their Foundation Stock Service program. Later, in 2021 the breed received full recognition by the AKC, who classified them within their Toy Group. Today, the breed is usually kept as a little playful, friendly, and energetic family companion.