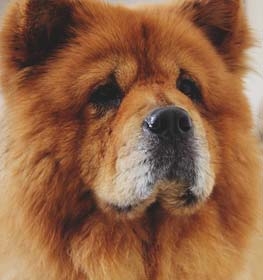 Collection of all the general dog breed info about Chow Chow so you can get to know the breed more.

Chow Chow As a Working Dog

The breed originated in China and is known to date to the Han dynasty, which ruled around 200 BC. According to some sources, the breed can have come originally from the Arctic Circle, then migrated to Mongolia and China, that is why the Chow Chow is possibly one of the oldest breeds. As members of the Imperial Household, they were fed on the best rice and meat by an army of servants, had a military escort, slept on rich carpets, and were awarded high courtly titles and decorations.

In Ancient China they were used as hunting dogs against bears, their meat was served as one of the finest delicacies and their fur was processed. In the 17th century employees of the Dutch, East Company took the Chow Chow to Europe and presented at the London Dog Show. At that time, their nature was hostile, all strangers were considered enemies. Thanks to European breeding, lots of their features have disappeared. The Chow Chow was a term of jargon applied to the great variety of articles taken by these boats. Like a nickname, the term surrounded these dogs. However, according to a Chinese legend, the Chow Chow’s tongue is blue because it licked the sky when it was painted.

In the second half of the 19th century, Chow Chows were showcased as wild dogs in the London Zoo. As Queen Victoria was gifted with some Chow Chows, people started keeping them at home. One of the most important years in the history of the Chow must surely be 1895. Four important events occurred. Champion Chow VIII became the first-ever Chow Champion, Peridot II was awarded Best in Show at the LKA Championship show, and the Chow Chow Club was formed. The breed became popular in the U.S.A. probably at the same time that their fame was widespread in England. Since the 1920s, the popularity of the breed has increased steadily. Many celebrities also became fond of the exquisite beauty of the Chow Chows and kept them as their companions.