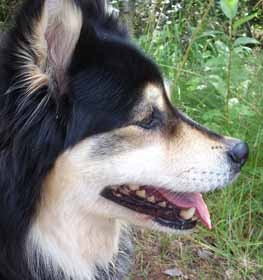 Collection of all the general dog breed info about Finnish Lapphund so you can get to know the breed more.

Finnish Lapphund As a Working Dog

Originally these Spitz-type companions were bred by the Sami people who are an indigenous group now divided in northern counties. They considered standardizing the breed before WWII since it almost went extinct due to a distemper outbreak. Luckily they were able to set the standards in 1945 by the Finnish Kennel Club. In 1950 they have created the standards of the dog breed involving accepted colors such as black, bear brown, and white. They are considered to be large, long, and narrow-headed.

A new phase of their breeding has begun in the 1970s, setting newly accepted standards in 1975. They have changed the breed size, reducing it for both male and female dogs. They also stated that now every color of the dog is accepted with the only stipulation that one of those colors must dominate most of the dog. Secondary colors are accepted on their head, neck, chest, underside of the body, and legs. The highest ever number of the breed has been measured in 2018, counting 1464 altogether. Now we can get to know them better.

This breed is waterproof and has been bred to hunt reindeer and is now popular all over the Arctic circle. They are known to be one of the friendliest breeds in the world which name they won with their remarkable empathy. They have a Spitz-like face and a tough coat which isn’t surprising looking at their origin. Their tail is curving over their back and is middle-sized with a big amount of muscle covering them all over their bodies. They are quick which is also needed in their field of work, they can go into a gallop in seconds. They are known to be very submissive but wary of strangers. They are known to be barkers and they shed a lot but their amazing traits and bubbly nature make them very popular.

They are considered to be healthy but there are some conditions that owners need to look out for. Dysplasia is one of them because of its size. Other diseases could be retinal atrophy which is an illness of the eye and their ears are quite prone to infections. If the owner looks out for their pet and at the earliest sign of any disease or disorder brings their dog to the vet it can live a long and happy life.

They have a double coat which is a smooth outer coat over a dense undercoat. Weekly brushing is necessary if we want our companion to look its best. Shaving this breed is a big no-no, it will make them lose their ability to keep cool in warm weather and warm in cold weather.

A long walk is often enough to keep the breed happy and healthy. They are not so much playful alone, as a herding dogs, they tend to enjoy exercise that stimulates herding so they can have their best time. They also enjoy other canine sports such as agility, obedience, rally, or tracking. Like other herding breeds they are quick to learn but can be strong-willed so it’s best to start their socialization at a young age.

It’s a surprising fact but they are one of the two dogs in Finland that are allowed to be kept outdoors in the winter legally.

This breed is almost exclusive to people of the north but if you want to have a unique and extremely friendly companion you should consider them on your list.

How old is my Finnish Lapphund in human years?