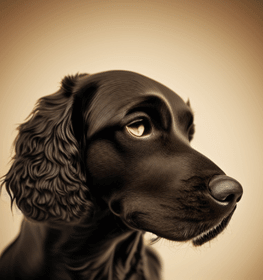 Collection of all the general dog breed info about German Spaniel so you can get to know the breed more.

German Spaniel As a Working Dog

The German Spaniel, in its home country also known as the Deutscher Watchtelhund (German Quail Dog), is a breed of dog that was developed in Germany around 1890. The man who is credited with the creation of the breed is called Frederick Robert. While various breeds have been bred into the contemporary breed, the most notable dog breed to be bred into it is the now extinct Stoeberer. The Stoeberer was known to have a scent following ability similar to that of a Bloodhound and it was described in the literature as early as 1719. Following the Revolutions of 1848 in the German states, the common men were allowed to hunt and needed a versatile hunting dog, and that dog was the Stoeberer. Moreover, in the late 19th century when Robert was working on his new breed, he found specimens of the Stoeberer in Bavaria and crossed those dogs with water dogs and sporting spaniels to create the modern German Spaniel. In 1903, the Deutscher Wachtelhund was recognized as a breed, and following that, the German breed club, the Verein fur Deutsche Wachtelhund was organized. The term Stoeberer has since become a category of hunting dog in Germany, with the Wachtelhund being the sole member of that category. The VDW chose four male dogs and seven female dogs as the foundation for the German Spaniel breed standard in 1910. Those canines were chosen from around Germany, with one from each region and two from Hannover. Those eleven dogs are the ancestors of all present registered German Spaniels.

As mentioned above, they are versatile hunters traditionally being used for upland game birds, but equally adept at hunting rabbits and waterfowl. Whether hunting in open fields, woodlands, farmlands, along fencerows, or marshland, a German Spaniel can get the job done. They are not usually kept as pets, but often owned by foresters and professional hunters. In the second half of the 20th-century, people started importing them into the United States, and descendants of those dogs are now very popular in Canada. For the past twenty years or more, some individuals, guides, and hunting outfitters in Canada have kept German Spaniels and used them as flushers, retrievers, and to track and hold wounded black bears at bay.

Furthermore, it is also interesting to highlight that John Scott, 1st Earl of Eldon, Lord Chancellor of Great Britain owned a German Spaniel named Pincher, thought to be his favorite dog. The dog was even painted by Edwin Henry Landseer. The dog originally belonged to his son William Henry, but became his constant companion.

Moreover, the breed has also gained popularity in Sweden, thanks to an increase in the number of wild boars in the south of the country, as well as crossbreeding with native spitzhounds to produce tough and brave dogs that will both chase and stop the boar, allowing the hunter to sneak in and kill the prey. If they are trained, they will also emit a death bark or hunt down wounded prey.

How old is my German Spaniel in human years?