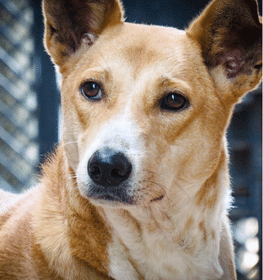 Collection of all the general dog breed info about Indian pariah dog so you can get to know the breed more.

The Indian Pariah dog is a landrace of dogs native to the Indian subcontinent. During the British Raj in India, this breed was named after the Pariah tribe of the Madras Presidency.

The Indian Pariah dog is also known as the pye-dog (sometimes spelled pie or pi) and the Indian native dog, both of which are derived from the Anglo-Indian words pye or pa and Hindi ph, all of which imply 'outsider'.

Desi Kutta or Desi Dog (which comes from the Hindi-Urdu word desi, which means ‘local’), as well as Indi-dog or In-dog, are some of the names given to it. Rudyard Kipling referred to it as the ‘yellow pariah dog’ in his writings.

The Indian Pariah dog is an ancient autochthonous landrace that can be found throughout India, Pakistan, Bangladesh, Afghanistan, Sri Lanka, and even outside of South Asia.

Prehistoric rock art portraying a dog of a similar type has been discovered at the Bhimbetka rock shelters, and a pariah-like dog skull was unearthed in the ancient Indian site of Mohenjo-Daro.

It was included alongside other ancient types such as the Canaan Dog of Israel and the Australian dingo in the National Geographic Channel's film, ‘Search for the First Dog’.

Moreover, the Indian Pariah dog was introduced to the Andaman Islands with the establishment of a penal colony there, dogs have been previously unknown to the native Andamanese.

Despite the fact that the Indian Pariah dog is very clever and easily trainable, merchants who wanted to market their foreign breeds within the country deliberately minimized the breed during the British Raj.

However, their popularity in the West has resulted in the shipment of hundreds of canines from the Indian subcontinent in recent years.

Furthermore, some people in society see these dogs as a threat, noting the fact that their population has been growing in India in recent years and how they constantly bark and bite people.

However, the majority of these attacks are provoked by humans, such as beating them with rods or throwing stones at them.

Every year, the number of dog bites and deaths as a result of dog attacks rises.

Indian Pariah dogs make wonderful family companions and get along well with both children and adults. They have a lot of energy and are great for kids that live an active lifestyle.

One of the oldest canine breeds still in existence is the Indian Pariah dog. This dog was around 4500 years ago, according to archeological research.

An Indian Pariah dog skull dated to 2500 BCE was discovered during excavations at the Mohenjo-Daro site in Pakistan's Sindh area. In addition, cave paintings across the Indian subcontinent suggest that Pariah dogs are one of the world's oldest canine breeds.

Although the Pariah Dog's line has been tainted by European crosses, there are still many purebred Pariahs, who are recognized by the Indian Kennel Club and the Primitive and Aboriginal Dog Society.