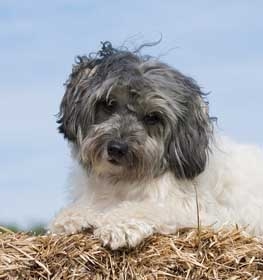 Collection of all the general dog breed info about Lowchen so you can get to know the breed more.

Lowchen As a Working Dog

The Löwchen is a very old breed. It is impossible to say where it came from with certainty, but there is enough evidence to suggest its history. There are now two schools of thought on the breed’s history. While both schools believe that the breed descends from an ancestor tracing to Tibetan type of dogs, this is where their agreement ends until the later history resumed during the latter part of the medieval period.

The original belief was that the Löwchen was developed in the Mediterranean and has spread throughout northern regions of Europe, including Germany, France, and Holland. If this concept if followed, the Löwchen would be considered a part of the Bichon family as well. This was the story of the breed until the late 1980s when extensive research was conducted for a Löwchen book.

Another alternative tale emerged from the investigation, which is backed up by a substantial body of evidence. Whatever history one chooses to believe in, we must admit that we will likely never know the true story and history of the breed. A canine genome study will presumably be able to sort out which breeds trace back to which ancestors one day, hopefully revealing this cherished breed’s true ancestors.

The breed’s history in art and folklore

The Löwchen’s origins can be traced back to the 1400s in Germany and Holland because most of the breed’s early evidence comes from these countries. Aside from written references, the breed can be seen in a number of medieval artworks. Among the best known are the Albrecht Durer Löwchen which abounds in several of his important works. The Löwchen he drew in 1500 is the same Löwchen reclining in someone’s living room today. There are many Löwchen images in well-known classics and obscure works that one could spend a lifetime discovering.

For generations, the breed has been a companion dog among both the governing elites and the common people. There are numerous amusing tales about the breed’s motivations. In one, a stone statue of a Löwchen is erected at the foot of a tomb containing the body of a knight who died peacefully. If he perished as a result of a battle, a great lion was erected to symbolize the knights’ valor.

Another story tries to explain the haircut by describing how the ladies of the court take the dog to bed with them because they believe the dog’s shaved body served as a bed warmer. Moreover, Conrad Gessner described the breed in “Histories Animalium” in 1555, making it the first written mention of the breed.

From that time on, the Löwchen was included in recorded dog classifications under several names, but most commonly as the “Lion Dog”. The other names included Shoshundle, Gutchen Hund, and Petit Chien de Lion, depending on the time era. Löwchen is a diminutive of the German word löwchen. It literally means small lion.

Many dog publications and antique encyclopedias mentioned the breed. The Löwchen can be found in works such as Hutchinson’s Dog Encyclopedia, Cassell’s New Book of the Dog, Das Edlen Hundes, Professor Gmelin’s The Animal Kingdom, and The Dog which was published in 1781.

Löwchen as a separate breed

The first breeder mentioned is from the 19th century, a German man called Dr. Walthier. He explained that the breed was given the name Leoninus because of its coat, not because it had a lion-like disposition. The next breeder we know about was involved in Löwchen’s rebirth. Maximillian Coninck of Belgium was breeding and exhibiting the breed at the turn of the century when the breed seemed to be making its final bow.

The most important client he had was a young married woman called Madame Bennert acquiring her first Löwchen in 1897. This was the start of a lifetime love affair between Madame Bennert and her pride of lions. While at the beginning, she had no intention of becoming a breeder, she was keenly interested in the breed. It was not until World War I, that she realized she would have to step forward to save the breed. She began her research to find quality specimens of the breed and her first litter was born in 1948.

Furthermore, another figure also appears to have played a role in Löwchen’s resuscitation. Madame Bennert’s professor known as Professor Kurt Konig began gartering Löwchen for genetic research. Kobaldt-Mascotts and Kobaldt-Daumlinge were the names he gave to the dogs he gathered for his breeding program. He and his research associates gathered dogs that were extremely hardy, healthy, and outgoing. He did not tolerate shy dogs. They stopped their breeding operations to dogs from outside after gathering the best dogs for the program.

It was not until he was elderly and made contact with Madame Bennert that his dogs contributed to the gene pool of today’s dogs. Madam Bennert and Professor Konig discovered that their dogs shared ancestors, making them suitable for both breeding programs.

Moreover, Madam Bennert received a black and white bitch named Quinte on the 6th of December in 1957, and she enrolled her with the ALSH registry as Fgitane in 1958. Fgitane was bred to Blaguer in that same year and she gave birth to Judith’s litter.

However, it is unclear whether Madam Bennert sent dogs to Professor Konig. Unfortunately, Fgitane was the only dog in his program to be incorporated into Madame Bennert’s breeding program and it is unknown what happened to his dogs. Moreover, from Madame Bennert’s kennel, the breed passed into the hands of Dr. Hans Rickert in the early 1960s.

Dr. Ricket was a veterinarian who had a special interest in genetics and he had helped Madame Bennert with her breeding program before. He established the Von den Drei Lowen kennel, which meant “from the three lions”. The first Von den Drei Lowen litter was born in 1964, Benjamin, Butzi, and Bienchen. This litter was important since all three dogs were foundation dogs for the breed in both Germany and worldwide.

Löwchens were imported into Britain in 1968 and the breed was accorded Kennel Club recognition in 1971. The breed also made an appearance in America in 1971. At this time, the Löwchen was still known as the “Little Lion Dog”. In the same year, the Löwchen Club of America was formed and the breed’s name was officially changed to “Löwchen”.

The breed was also accepted into the American Kennel Club Miscellaneous Class in 1996, and then fully recognized into the non-sporting group in 1999. The number of Löwchens in the world continues to decline, and the breed is now classified as at risk for extinction. Efforts to save the species have begun.

How old is my Lowchen in human years?

Sharing is caring.
Help our free service by spreading information about dog breeds.
Link to this: Lowchen Breed Information
<a href="https://dogell.com/en/dog-breed/lowchen">Lowchen Breed Information</a>
Despite the best intentions, there may be errors. If you find one, please let us know and we will fix it as soon as possible. Contact us here.