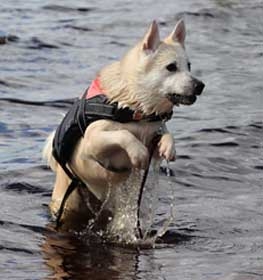 Collection of all the general dog breed info about Norwegian Buhund so you can get to know the breed more.

Norwegian Buhund As a Working Dog

The breed’s origin leads us back to ancient times when dogs sailed seas and traveled with the invaders of Norway, the Vikings in 900 a.d. The remains of spitz-type dogs have been found in Viking graves and in the oldest archaeological sites in Norway. According to ancient paganist beliefs, the dogs were buried with the Vikings after their death, with the purpose of continuing their various duties in the afterlife, serving their owners even beyond the grave.

The breed’s traits are very similar to the Icelandic Sheepdog’s, they were both bred to be farm dogs serving as herders, guardians of owners and property, and all-purpose farmhands. In fact, the breed got its name from the Norwegian word “bu” meaning “farm”, thus its name basically translates as “farm-dog” in the local language. The Norwegian Buhund is also known as the Norwegian Sheepdog or as Norsk Buhund.

The Buhund remained an indispensable member of the Norwegian farm life for centuries, but in the early 1900s, the import of other similar herding breeds caused the decrease of their population. Yet, despite this decline, in the breed’s homeland, Norway, farmers still use the breed as general farm dogs. In most areas, every farm had Buhunds to herd and watch over the pigs, reindeer, sheep, cattle, and various livestock. The shepherds spent the summers in mountains with the herd, and they brought their dogs to watch over them. The dogs had to work independently to gather stock, because the land was usually rocky, with steep slopes. They gathered easily the flock finding and flushing them by barking, they even walked on the sheep’s backs to get from one side of the flock to the other.

The breed was first shown in 1913 in an agricultural show, after that in the 1920s, multiple shows dedicated just for the Buhunds were held with state-run sheep and goat shows, in order to rekindle interest in farmers for the breed.

The Norsk Buhund Club was founded in 1939. After World War II., the breed was exported to England and later to the United States. In America, the Norwegian Buhund Club was formed in 1983. In 2004, the AKC (American Kennel Club) recognized the breed and the Buhund became a member of the AKC Herding group.