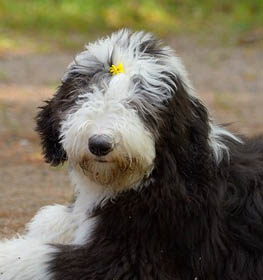 Collection of all the general dog breed info about Old English Sheepdog so you can get to know the breed more.

The Bobtail is a playful, lovable clown who is happy to spend time with his family. Giant, athletic dog breed with a unique shaggy coat. Their fur covers their eyes, which doesn't disturb the animal at all. Their movement is unique: they raise the legs on the same side at a time. They have small, so-called cat paw, and it is also rich in hair. A calm and balanced dog with an easy-going character. Extremely intelligent, fast learner, always looking for something interesting and fun. It is an excellent guard dog and also friendly, calm and loyal. Characteristic of her strange, trembling barking. He is famous for his wonderfully sweet character, strength and diligent. Those who know and love the breed can also be aware of their sense of humor. They’re both playful and funny at once, yet a true guardian and defender of the family. Bobtails loves being with their family, they hate loneliness, so the breed can suffer from separation anxiety if they stay alone for too long. The Old English Sheepdog is extremely adaptable. For some people, it may be surprising that the breed can live comfortably in an apartment if you are walking them regularly.

Bobtails gets along well with other dogs and pets, but sometimes they’re prone to jealousy. They are also friendly with children and they really love them. In the United States, it is also called "nanny". The Old English Sheepdog likes obeying to his master's, so they rarely behave dominantly, so it’s very easy to train them. Nowadays, this dog enjoys the comfort of home life and is an extremely agile, obedient and good observer. Long hair, enthusiastic, cheerful character make Bobtail a great companion for any family, who has time and patience for it, but it must be taken into account that the breed requires a lot of care. Because of the origin of a herding dog, they like doing active tasks, like 1-2 hours of daily exercise. Due to his speed, obedience, and sense, the Old English Shepherd Dog can provide excellent performance in a variety of dog sports.

Training and proper socialization are essential to them. They’re responsive to kind and consistent training. Bobtails were originally bred for herding cattle and sheep, so it requires regular exercise. Obedience training is recommended for all dogs, but especially for large breeds such as the Old English Shepherd Dog. The basic commands ("sit", "come", "stay") are important for everyday life with any dog, but take note of this drooling shepherd dog and realize that these commands are key.

The Old English Sheepdog comes from the South West of England, from the early 19th century. About two or three hundred years ago, western England sheep farmers decided to create a tough, agile, intelligent shepherd breed. This is how the Old English Shepherd Dog, also called the Bobtail, was created. As with other flea herds, one of the basic requirements for the breeding of the Old English Shepherd Dog was to have a massive dog, as they were not only used for herding but also to protect the animals. In the 18th century, cattle and sheep were brought to the fairs by these herding dogs. In England, a luxury tax was imposed on the dogs of the thanes, and the owners of the common guard or shepherd dogs cut their dogs' tails to prove their simple origin. This is the habit of not paying taxes on herding dogs, and the dog's occupation was often indicated by the mutilation of the tail.

There is still much debate around the exact origins of the Old English Shepherd Dog. Some say they not only became from old-style English flock dogs but also from the Russian Greyhound and Bearded Collie. Others claim to resemble the Russian Shepherd Dog, the Ovcharka. This is possible as well since salesmen on the ships of their merchants could easily get Bobtails to the island.

Of course, with the change of fashion, breeding requirements also change. Today's breeding of the Bobtail is primarily aimed at making the dogs look even more beautiful, striking and elegant, which is why they prefer the longer, almost silky hair.

The Bobtail appeared in the United States at the end of the 1880s, where the dog was first owned by a craftsman named W. Wade in Pittsburgh. In the 1900s, the breed was only owned by five rich American families. This prompted a dog show supervisor to advise the jury of the New York 1904 Westminster Show that "dogs belong to the wealthiest Americans".

The Bobtail was recognized by the American Kennel Club in 1885. At the end of the 1950s, the breed was still popular with rich dogs. However, in the early sixties, the breed became a status symbol for the family animal. In the mid-seventies, 15000 dogs have registered annually; but this number fell later as more and more people came up with the extra costs and effort needed to keep the dog in the wonderful but time-consuming coat of the old English Shepherd Dog.

How old is my Old English Sheepdog in human years?

Sharing is caring.
Help our free service by spreading information about dog breeds.
Link to this: Old English Sheepdog Breed Information
<a href="https://dogell.com/en/dog-breed/old-english-sheepdog">Old English Sheepdog Breed Information</a>
Despite the best intentions, there may be errors. If you find one, please let us know and we will fix it as soon as possible. Contact us here.