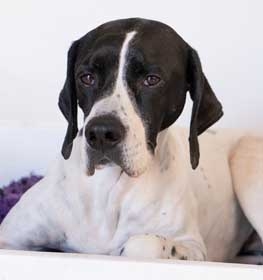 Collection of all the general dog breed info about English Pointer so you can get to know the breed more.

English Pointer As a Working Dog

The breed is originated from Spain, although their history is somewhat murky. The breed’s history is presumed to have started 3000 years ago, for the reason that dogs, identifiable as early Pointers were discovered on the walls of Egyptian tombs. In France and also in England, paintings were found from the 17th century, and bronze figures from the 19th century portraying this breed.

Pointing-type breeds are said to have been known in England from the 1650s, yet it is also assumed that, in 1713, at the end of the Spanish Succession War, British army officers returned England from Spain with these Pointer predecessors. Pointers were originally used in conjunction with Greyhounds in the 17th century. Later, Italian Pointers found their way to England, and they were crossbred with the Spanish Pointer, leading to the Pointer as we know them today. Another theory suggests that the breeding procedure also involved more breeds like the Foxhound, Bloodhound, Greyhound, and later various setters were mixed into the Pointer, resulting in a breed possessing elegance and grace, speed and endurance, incredible scenting-ability and beautiful appearance with easy maintenance. In the end, they created a fantastic hunting dog who became a favorite of many of the aristocrats and the bourgeoisie in England, thanks to their even-temperament, friendly and affectionate behavior towards children and their owners.

The Pointer was a term to describe any type of hunting dog that used the pointing technique while hunting. In the days before rifles, British pointing dogs hunted hares in tandem with coursing hounds. The Pointer’s duty was to find and indicate prey, with the cooperation of the hounds who would give chase. The Pointer became a devoted and durable gundog, in the 1700s, with the rise of wing-shooting. Two of the most well-known British Pointers were Juno and Pluto, owned by Colonel Thornton, who was said to have held a point on a covey of partridges for a little more than an hour. This story brings to mind the old English joke about a hunter who lost his Pointers on the moors, then a year later, he found his dogs as skeletons pointing toward a skeleton of a bird. After the invention of guns, the hunter’s methods changed, the Pointer was taught to be “steady to wing and shot”. This technique meant that the dog needed to a standstill after the bird has been flushed and until the gun has been fired, waiting for the hunter’s instruction to retrieve the bird.

Until the Civil War, between 1861 and 1865 America was not introduced to pointers. In 1876 a lemon and white-colored Pointer named Sensation was imported to America from England. The breed was one of the first nine breeds registered in America in 1878 and was recognized by the AKC (American Kennel Club) right after it was founded in 1884.

How old is my English Pointer in human years?