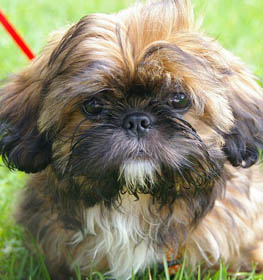 Collection of all the general dog breed info about Shih Tzu so you can get to know the breed more.

The Shih Tzu’s history goes back to ancient times, and it is steep in mystery and controversy. Recent research suggests that the Shih Tzu is one of the 14 oldest dog breeds in the world, dog bones found in China have proven that the dogs were there as early as 8000 B.C. Some experts presume that the breed was created by Tibetan Monks and given as gifts to the Chinese nobility and royalty. It is also speculated that the Shih Tzu was developed in China by crossing other breeds with other Sino-Tibetan breeds and the Pekingese or Lhasa Aspo. Regardless of where the breed was created, it is crystal clear that the dogs were treasured companions from the earliest times. Writings, arts, and paintings from China’s Tang Dynasty, from 618-907 A.D. exhibit small companion dogs similar to today’s Shih Tzu. References to the dogs’ existence appeared from 990 to 994 A.D. in wall carvings and drawings.

Marco Polo reported in the 13th century, that the Mongolian Emperor, kept small so-called, lion dogs with trained hunting lions in order to keep the lions calm. Between 1368 and 1644, during the Ming Dynasty, royal families kept Shih Tzu type of dogs that strongly resembled lions. Thus, consequently the name Shih Tzu means little lion, yet there is nothing fierce about the breed, they are more of a companion dog than fighting beasts. Another legend suggests that Buddha traveled with little dogs fitting the description of today’s Shih Tzu. The story states that one day, a couple of robbers came upon Buddha with the intent of robbing and murdering him. The small dogs have changed into ferocious lions and scared off the criminals, saving Buddha’s life. Then the lion turned back into Buddha’s little companion dog, which Buddha picked up, kissed, and blessed. The white spot on the heads of many Shih Tzus is believed to be originated from Buddha’s own kiss. Because of the dogs’ heroic actions, many also believe that Fu Dogs, the guardians of Buddhist temples are also representations of Shih Tzus. The breed gained more popularity in the Imperial Court after a royal concubine became the Empress of China, in 1861. The Dalai Lama gave her a pair of Shih Tzus, reportedly the source of the imperial palace's little lion dogs, during Empress Tzu Hsi's reign.

In 1908 after her death, many of the nobility competed to produce dogs of the finest colors and coats. Because of the fierce breeding competition, the breeding plans and practices remained in secret, resulting in poor quality dogs sold in mass marketplaces, and good quality dogs being smuggled out of the country. The first pair of Shih Tzus were brought to England in 1938 from Peking by Lady Brownrigg. Maureen Murdock and Philip Price were the first to bring and breed Shih Tzus in the United States.

The breed got recognized by the AKC (American Kennel Club) in 1969. Since then, the Shih Tzu has been one of the most popular breeds both in the UK and in the US. The breed’s fanciers include Queen Elizabeth II. and pop-star Miley Cyrus.