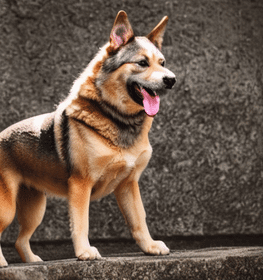 Collection of all the general dog breed info about Shikoku dog so you can get to know the breed more.

Shikoku dog As a Working Dog

The original Shikoku or in its other name, Kochi-ken have existed in the mountain ranges of Kochi Prefecture, on the fourth largest island in Japan, the Island of Shikoku. This remote area is defined by the mountainous terrain, that is not really accessible for outsiders. This is the reason why, during the creation of the Shikoku, the breeders were capable to maintain a high degree of purity in their ancestry. Moreover, those who developed and preserved the Shikoku were staying in isolation from each other, limiting the ability to crossbreed their own lines, preventing any malfunction in the DNA bases. This isolation contributed to the breed development into different strains. There were two initial bloodlines, which can be traced back to five different strains that were easily identifiable by their unique marks.

Resembling another type of Spitz dogs, the Shikoku-Inu was originally bred for hunting purposes. Unlike most breeds, they were not developed to hunt in packs, yet rather to work individually with their companion, to track and trap larger game including, wild boar and deer. Thanks to the mountainous terrain, which was usually covered with thick under brushes and bamboo, the breed got used to this working environment, leading to being very agile and hardy dogs, capable to work in rough, remote areas, sometimes without any help. The breed was highly esteemed by the Matagi, the Japanese hunters. The hunters used two different techniques; the barking to detain and the biting to detain. Mostly the dog’s duty was to track down the animal, then hold them in position long enough for the hunter to arrive and terminate them. When it came to a larger specimen of wild boar, it took courage and sturdiness for the dogs to be able to keep the animals in position. This behavior left its mark on today’s Shikoku’s characteristics as well.

During the Tokugawa period, the Japanese foreign policy was based on isolation, thus, the Shikoku-Inu got preserved for centuries. Although the introduction of Western breeds began to influence the Japanese culture, moreover foreign dog breeds started to be more valuable and popular than their Japanese counterparts, leading to a decrease in the breeding of native breeds. However, fortunately, in the early 20th century, with the rise of Japanese nationalism, the native breed’s revival process had begun. In 1937, this culminated in the description of several Japanese dog breeds, including the Shikoku-Inu as “Living National Monuments”, which afforded the existing dogs, and the breeding programs some protection.

Nowadays, the Shikoku-Inu remained rare outside its homeland, and the breed is not widely recognized by the major kennel clubs. The Shiba-Inu is far more popular in the Western world, and because of the high degree of resemblance between the two breeds, some are still mistaking the Shikoku for a Shiba, nonetheless, it is two very different breeds.

How old is my Shikoku dog in human years?