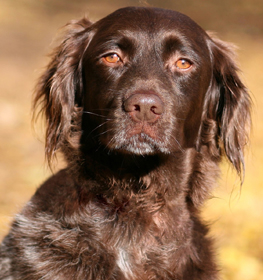 Collection of all the general dog breed info about Small Munsterlander so you can get to know the breed more.

Small Munsterlander As a Working Dog

The Small Munsterlander is one of the latest versatile hunting breeds to gain popularity in the United States, but while they may be new to the US and Canada, the breed has been used in Europe since the 13-14th century. In the 16-17th century, German, Italian, and Dutch artists already painted Small Munsterlander-like dogs. Although there are many similarities between these dogs and today’s breed, the true origin of the dogs from that time has never been proven exactly. The Small Munsterlander was known in the early days by a variety of names. Hermann Löns called them “heathland quail dog”, some named them “The little spy” or Spiönken after the characteristics fashion in which their small hunting dogs worked in the field and many clergy and teachers owned the dog so they named it the “Little Master’s Dog”.

According to experts, for several hundred years these small, handsome dogs were the companions of hunters in the marshes and moors in the northwestern part of Germany, especially in Westphalia. Prior to the 19th-century hunting was a privilege of the landed upper class who had the financial resources to breed, train and manage large kennels. Although, at the beginning of the 1800s the middle class gained access to hunting through land ownership and these hunters also wanted a companion dog with excellent hunting skills. However, in 1840, the creation of land reforms changed the viability of hunting in Germany, so the Small Munsterlanders eventually lost their popularity and it seemed that their extinction was inevitable. A few farmers were able to keep the bloodlines pure on their isolated farms in the moors, by keeping the most promising bitch for breeding and culling the rest of the females in the litters. After the change of the German hunting law, the increasing numbers of hunters and the systematic cultivation of the game stock led to the breeding of new German Pointing Dogs.

The systematic breeding of hunting dogs began in the middle of the 19th century. There are two breeders documented, who regularly bred Munsterlander in their kennels, one of them is a school teacher called Heitmann from Brugsteinfurt, and another one, the gamekeeper Wolberg from Dorsten. Apparently, in the blood of their Munsterlands flowed the blood of the old North German tracking and pointing dogs. According to experts, it is also likely that their bloodlines were intermingled with Belgian and French Epagneuls and Spaniels. Both of these breeding lines, the more delicate Heitmann line, and the sturdier Wolberg line formed the foundation of the “Kleine Münsterlander Vorstehhunde” breed. The sibling pair from both the Heitmann line and the Wolberg line are documented. The Munsterlanders were medium-sized, long-haired, intelligent, and worked tirelessly in the field, water, and forest. As hunters, they were passionate about tracking dogs and dependable retrievers. However, it was not for another 50 years that the breed had established sufficiently itself with hunters before a breed club names “Association for Kleine Münsterlander Vorstehhunde” was established in 1912. Moreover, there was another man who also dedicated himself to the Munsterlander, called Edmund Löns, brother of the famous poet, writer Hermann Löns. The brothers had been searching for good breeding dogs since the 1870s and in 1907 they came in contact with Heitmann. He helped to make the breed more famous by writing numerous articles in the German hunting and international press and this way he advanced the rapid spread of the breed. In 1927, he also brought brown roan to the breed, which until then recognized only brown-white dogs. A brown roan female had so impressed him with its intelligence, desire, and independence that he purchased and used her as a breed dog. This color prevailed and was also officially recognized by the association as an approved color. The genetic strength of this color demonstrates itself in almost half of all Munsterlander. By 1921, Edmund Löns and Dr. Friedrich Jungklaud had formulated and published the breed characteristics of the Munserlander, which were the basis for the further development of the breed.

In the decades until the end of WWII, the fate of the Munsterlander breed developed eventfully. However after the war Edmund Löns went his own way as he had different ideas about a rigorous performance breeding of the breed. He established his own club, which in the end was unable to prevail. In 1961 he integrated his club back into the original funding club which had maintained the development of the breed. In 2004 the F.C.I concluded the breed standard which is still valid today. The breed is also recognized by the AKC as a Foundation Stock Service breed and by the United Kennel Club as a gun dog.