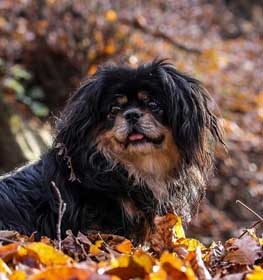 Collection of all the general dog breed info about Tibetan Spaniel so you can get to know the breed more.

The Tibetan Spaniel is an ancient breed that has existed in Tibet for more than 2000 years. The Buddhist monks treasured the dogs, deeming them too precious to sell, so the Tibetan Spaniels could only be gifted. They were mostly gifted to esteemed friends and royalty. The gifting of the breed to palaces and monasteries in China and other Buddhist countries, the exchange of other oriental breeds to Tibet, and the research of Schulmuth all give evidence to the modern Tibetan Spaniel as having common ancestral ties to the Japanese Chin and the Pekingese. Moreover, the breed was only loved and revered by the monks, but also commonly liked and lived among the villagers of ancient Tibet. The breed tended to vary more in size, with the smallest specimens being the most prized and sent to the monasteries, while the larger dogs would remain among the villagers. Whether they would reach their potential through a life devoted to worship among the ancient monks or as a workingman’s companion, the Tibetan Spaniel was useful and available to all Tibetans, regardless of social status.

Although having an eastern upbringing, by the late 19th century, the Tibetan Spaniel was making his way to the West, first to Europe and then eventually to the United States. Records indicate that the first one arrived in England beginning around the 1890s. However, there are some speculations around how exactly the breed arrived in England. Some people believe it was brought by a sailor, who had returned from a far-east voyage and brought the dog back with him in 1885. Another popular story is that the Tibetan Spaniel may have first arrived in the West accompanying missionaries returning from the East. However, regardless of how the breed actually arrived, it was only around the 1920s that England started to see real interest in the breed. Unfortunately, WWII brought any breeding of the Tibetan Spaniel, and many other dog breeds, to a near end. Due to pressures and expenses during the war, many breeders could not afford to maintain their kennels. Because of this, most modern breeds of Tibetan Spaniels found in the West can trace their heritage back to a single female dog names ‘Mughiwuli’. In keeping with the tradition of giving the dogs as gifts, Lady Wakefield, who came from an English noble family, was presented with Mughiwuli as a gift from the Maharajah of India. According to some evidence found, the dog was treated quite royally. For example, when it was time to breed, Sir Pratap Singh of Nabba insisted on sending her in his own Rolls-Royce for the journey to meet her mate. ‘Tashi’, a male Tibetan Spaniel brought from the Tashi-Gong Monastery in Western Tibet was acquired especially for the purpose of mating with Mughiwuli. In 1946, their union produced two puppies called Garpon and Potala, and these pups were taken to England and registered there and became the foundation of the English-bred Tibetan Spaniel.