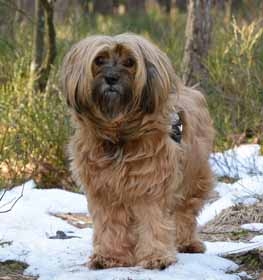 Collection of all the general dog breed info about Tibetan Terrier so you can get to know the breed more.

Tibetan Terrier As a Working Dog

The Tibetan Terrier, also known as the Dhokhi Apso or Tsang Apso, originated in Tibet to aid shepherds. However, the breed’s origins are unknown before it appeared in Tibet. Although there are many stories and theories out there about the breed’s origin. For example, some believe that the breed is a descendent of a dog that traveled with the Cuman people, a Turkic-speaking people that originated in western China near Tibet but fled invading the Mongols. Others think that the breed comes from the “Lost Valley” which became isolated as the result of a violent earthquake at the beginning of the 14th century. Heads of monasteries who visited the valley before the disaster took place were given a Tibetan Terrier as a good luck token that would carry peace and prosperity to their monasteries.

Furthermore, its Tibetan name, Tsang Apso mentioned above, actually translates to “shaggy or bearded dog”, but for at least 2000 years the monks who owned and lived with Tibetan Terriers also referred to them as “the little people”. The breed was so valued by the people around them, they were considered more than just companions. They were also working dogs that herded, protected, altered, and even retrieved items that fell off monastery walls or mountainsides. They were also known as “Holy Dogs” and were never sold, but presented to visiting lamas only. The breed evolved over many centuries for sure, surviving in Tibet’s extreme climate and difficult terrain, developing a protective double coat, compact size, unique foot structure, and great agility.

Moreover, the Tibetan Terrier was introduced in the West back in the 1930s by a British surgeon, called Dr. Agnes Greig who was working in Tibet. She was given a female Tibetan Terrier puppy after she operated Tibetan woman who had an ovarian cyst. The puppy was given as a token of gratitude by the woman and her family. Dr. Greig named the puppy Bunti and eventually, she became so fascinated with the Tibetan Terrier, that she obtained more dogs and managed to get the breed recognized by the Kennel Club of India, which changed the breed’s name from “Lhasa Terrier” to Tibetan Terrier. According to experts sources differ on when exactly Dr. Greig returned to England, but she brought her dogs home with her and together with her mother, who was already an established dog breeder, started to breed Tibetan Terriers. The British Kennel Clun followed the lead of the Indian Kennel Club and in February 1931, the first registration of Tibetan Terriers appeared in the Kennel Gazette Breed Records. The Tibetan Breeds Association was formed in England and efforts were made to encourage breeding within a fixed standard of points. Dr. Greig established the world-famous Lamleh Kennels in England where she bred Tibetan terriers until her death in 1972. Although Dr. Greig was instrumental in getting the Kennel Club to recognize the breed, she was vehemently opposed to ‘glamorizing’ a breed she considered to be a working dog with a short rugged coat. A Tibetan Terrier Club in the UK was also formed in 1956. In the same year, Dr. and Mrs. Murphy of Great Falls, Virginia imported the first “official” Tibetan Terrier into the United States from England. The following year a mate was imported and the Kalai Kennels was established. Mrs. Murphy continued to breed her Tibetans at Kalai until her death in 1976. During the last twenty years of her life, she worked tirelessly to promote the breed in the United States and Canada. She and her husband founded the Tibetan Terrier Club of America, which was established in 1957. The TTCA acted as a registered organization for Tibetan Terriers until the breed was recognized by the American Kennel Club, encouraged and promoted purebred Tibetan Terriers, and protected and advanced the interests of the breed in the USA.

How old is my Tibetan Terrier in human years?