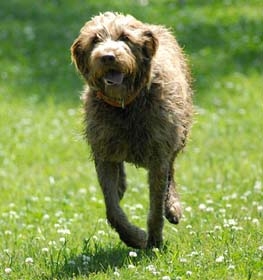 Collection of all the general dog breed info about Wirehaired Pointing Griffon so you can get to know the breed more.

The Wirehaired Pointing Griffon can trace its origins back to the late 1800s. During that time, in Continental Europe, all sportsmen and hunters were obsessed with breeding dogs that were versatile, yet very effective at their specialties. To give the Wirehaired Pointing Griffon a little historical context, the concept of the breed emerged after Mendel’s experiments on inheritance were published in the late 19th century, which scientists marked as the period of biological awakening.

One of these men was named Dutchman Eduard Korthals, the son of a well-established banker family from the Netherlands. He is credited with the creation of the Wirehaired Pointing Griffon. Mr. Korthals’s intention was to develop a breed that could work as a pointer on drylands, and also as an excellent retriever in water, with their webbed toes designed for swimming. The breeder worked with and included several breeds into the Wirehaired Pointing Griffon thus, it is unsafe to point out the true ancestry of the breed. Yet, presumably, he used Setters, Spaniels, Pointers, and Otterhounds in the breading mixture. He started the breeding process in the Netherlands in 1874, and his first litter produced three specimens of the breed named Lina, Moustache I, and Querida. It seemed that a great deal of the puppies he produced, succumbed to neonatal illnesses, which was probably related to the issue of interbreeding, however, the conditions are unclear and not well-documented. Due to these losses, only 10% of the dogs made into Korthals’s studbook. Then he managed to perfect the breed during his work in Germany. Finally, he completed the development process in France, where he was able to establish the first breed standard because he was producing generations of dogs that were consistent in appearance and in behavioral traits. This is the reason why, partisans have argued ever since, whether the Wirehaired Pointing Griffon is properly a French or a Dutch breed.

Korthals succeeded and managed to create the perfect gun and retrieving dog with great swimming capabilities. Soon enough, he was able to win over many people to use his breed. The Wirehaired Pointing Griffon received great popularity quite quickly. Despite the breed was first exhibited in a show in an early phase of the development, hunters started to get excited about them overseas too. The first specimen of the Wirehaired Pointing Griffon was imported to the United States of America in 1887, and they received recognition by the AKC (American Kennel Club) in the same year, right away.

The Wirehaired Pointing Griffon was initially bred and used for hunting, pointing, and retrieving waterfowl, hares, and game birds. Throughout the breed’s whole existence, fanciers claimed that it is the supreme gundog and even nowadays, the breed still actively used for these types of activities. Today most of the dogs are family companions, enjoying every kind of work including, obedience, agility, and tracking. Since its initial creation, the breed’s population is growing steadily.

How old is my Wirehaired Pointing Griffon in human years?

Sharing is caring.
Help our free service by spreading information about dog breeds.
Link to this: Wirehaired Pointing Griffon Breed Information
<a href="https://dogell.com/en/dog-breed/wirehaired-pointing-griffon">Wirehaired Pointing Griffon Breed Information</a>
Despite the best intentions, there may be errors. If you find one, please let us know and we will fix it as soon as possible. Contact us here.