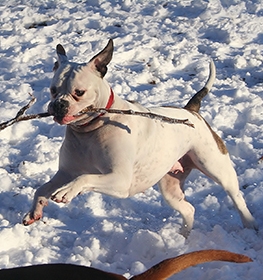 Collection of all the general dog breed info about American Bulldog so you can get to know the breed more.

The Bull and Bulldog-type breeds quickly gained the interest of the American people, especially, they were widespread among the immigrant farmer communities. Immigrants usually brought their dogs with them to the States, and they started to work with them on the farms and ranches. The farmers and ranchers used the Bulldogs for many tasks, as all-around farm helpers, where the activities included guarding livestock and property, and controlling the vermin population, and being a family companion. The breed was the most widespread, well-known, and employed in the southern states, thanks to the dogs’ strong jaws and muscular build, and to the ability to catch and occasionally kill feral pigs, on command. These feral pigs were especially dangerous animals that made the life of the New World settlers extremely risky, due to the various kinds of illnesses they carried. The Bulldogs could also effectively keep the wild hog population down while protecting the livestock. Consequently, the breed quickly became very highly esteemed and was regarded as an invaluable asset.

There were several different strains of the "American Bulldog", as the early Bulldog breeders focused on different features of the dogs and bred them accordingly. These early Bulldogs were known under a lot of different names, usually referring to their place of development, such as Alabama Bulldog, Southern Bulldog, and English White. Unfortunately, by the end of the Second World War, the population number of the American Bulldog significantly decreased, to the point where the breed was on the brink of extinction. The only surviving specimens were kept on remote farms and ranches in the south-eastern states. Fortunately, the breed's enthusiasts and other breeders, including John D. Johnson and Alan Scott made serious efforts in order to preserve and revive the breed, while trying to create a homogenous physique and nature for the breed standard. Breeders included the pure English Bulldog into the process, in order to maintain and enhance the bull-type of looks.