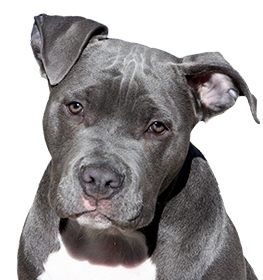 Collection of all the general dog breed info about American Staffordshire Terrier so you can get to know the breed more.

The American Staffordshire terrier’s history can be traced back to the 19th century, originating in England. Sadly the bulldogs and terriers of the time were started to get crossed in order to create fighting dogs although dogfighting was outlawed in the United Kingdom as early as 1835, it continued to flourish as the ban was difficult to enforce. The aim was to create animals that possessed the agile and energetic characteristics of a terrier and also the perseverance and confidence of a bulldog.

In the case of bull-type terrier breeds, all can agree that the common component in their makeup was the Bulldog although its appearance and characteristics widely differed from the one we know today, it was a much ferocious creature back then. The disagreement begins with the terrier part. There is a lot of argument between experts about which pre-existing terrier breeds resides in the Staffordshire’s genetic background. Some claim it was the white English Terrier or the Black-and-Tan Terrier, that was used as a cross with the Bulldog to perfect the Staffordshire Terrier. Others suggest that game terrier, for example, the Fox Terriers were used due to their gameness, which is useful in fights, so it is rational to conclude that the breeder's intentions were to perfect the bloodline with this characteristic. Anyways, it was the cross between the Bulldog and terriers that resulted in the Staffordshire Terrier. The bull-and-terrier dogs came to the United States towards the end of the  1800s  where they became known as pit bull terriers and then American bull terriers. Eventually, after its arrival to the US, the local breeders developed a  version of the Staffordshire Terrier which was larger than the English one. Now they are recognized by the AKC and most major international Kennel Clubs as two distinct breeds: the Staffordshire Bull Terrier and the American Staffordshire Terrier.