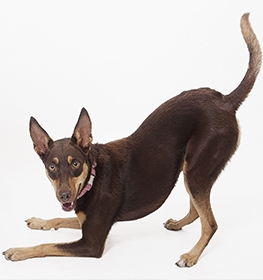 Collection of all the general dog breed info about Australian Kelpie so you can get to know the breed more.

Australian Kelpie As a Working Dog

The word “kelpie” is derived from the ancient Celtic mythological folklore, it is used to describe a shape-shifting water spirit in a form of a horse, bearing ill will towards humans. Yet, this has little to do with the Australian Kelpie’s development and its original purpose.

The Australian Kelpie can trace its origins back to Australia. In the beginning of the 1800s, now-extinct Black-and-White Collies were imported from England mainly to the Australian States of Victoria and New Wales, with the intention of herding livestock there too. Around the 1870s, these imported Collies were cross-bred with some indigenous Dingoes. The introduction of the Dingo breed seemed counterintuitive at that time, for the reason being that the Dingo was considered a natural predator of the sheep. However, the gamble paid off positively, because the herding gene got more powerful after a few generations of Dingo crosses. The result was a hardy breed which had powerful stamina, and which could work tirelessly in the tough climatic conditions and in the harsh environment of Australia. The Australian Kelpie quickly gained appreciation from the farmers and ranchers for their ability to work independently and for their intelligence.

One of the earliest breeding programs was also named Kelpie after its owner, consequently, the name stuck for generations. Later, the first dog named Australian Kelpie was bought by a man named Jack Gleeson in 1872, from a Scottish man named George Robertson. George Robertson is credited with naming the breed, after the Celtic word. The Australian Kelpie is thought to be exported to other countries during the early 20th century. The breed quickly became well-esteemed in herding a range of livestock including cattle, reindeer, goats, and many others in different parts of the world. The Australian Kelpie was especially well-renewed in the United States, where the breed could adapt itself to all of the climatic and environmental conditions the whole country offered.

Nowadays, two different strains of the Australian Kelpie emerged, the show Kelpie which is less lean and athletic, and the working Kelpie which is currently can be seen on farms fulfilling active working duties. Australian Kelpies can be found all around the world, performing multiple tasks efficiently around the farms and ranches. However, the breed is also used in detecting works, as service and therapy dogs, and in sports like herding or agility, thanks to the breed’s versatility. The Australian Kelpie is rarely seen just as family companion because it is a very clever and energetic working breed, which requires a lot of mental, and physical stimulation from a very young age in order to avoid destructive or even wild behavioral patterns. Today approximately 100,000 Australian Kelpies are used in accordance with their initial purpose in Australia. Despite their well-established breed standard and their long history, just a few of the major kennel clubs recognize the breed, including the UKC (United Kennel Club).

How old is my Australian Kelpie in human years?