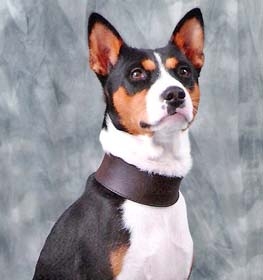 Collection of all the general dog breed info about Basenji so you can get to know the breed more.

Basenji As a Working Dog

Scientific research has officially confirmed what Basenji enthusiasts have long suspected, Basenjis are one of the oldest breeds of dogs on this earth.

They are regarded as the most attractive and intelligent of all breeds by their admirers. The Basenji captures its owner’s affection whether it’s hunting, proudly posing in the sun, or receiving hugs.

Drawings of pariah-type dogs can be found in various hunting scenarios in prehistoric cave paintings discovered in Libya between 6000 BC and 100 AD.

The Egyptians had Basenjis as shown by relics from as early as 3000 BC. Their curled tails and prick ears are clear and they appear to be wearing the typical hunting bells still used in Africa. Moreover, Dr. Schweinfurth traveled to Africa around 1868 and wrote about domestic animals.

Among the different dogs, he found and illustrated that there is one which is surely the Basenji. He found the dogs that were clearly Basenjis among people who were hunters rather than pastoralists.

According to explorers and authors, Basenjis were found many times with the Pygmies. Pygmy peoples are ethnic groups whose average height is unusually short.

Moreover, this breed had survived in Africa for millenniums as they were excellent hunting dogs and provided their owners with a good amount of food.

The Basenji produced an unusual yodel-like sound, due to its unusually shaped larynx. This trait also gave the Basenji the nickname: ‘Barkless dog’.

In the native Lingala language, the Azande and Mangbetu people of the northeastern Congo region refer to Basenjis as “mbwá na basnzi”.

This translates to "dogs of the savages" or "dogs of the villagers." The Basenji is also known as the "dog of the bush" in the Congo.

“M'bwa m'kube,'mbwa wa mwitu'” (Wild dog), or “dog that jumps up and down,” is another local term, referring to their inclination to jump straight up to spot their prey.

The first Basenji-like dogs that made it from Africa to Europe were seen in the 1880s. They were first called Congo Terriers and a standard was created.

However, they were somewhat different in look from the traditional ideal Basenji. The first dogs to be exhibited appeared at Crufts in 1895 and were called African Bush Dogs or Congo Terriers.

Several attempts were made to bring the breed to England, but the earliest imports succumbed to the disease.

In 1923, for example, Lady Helen Nutting brought six Basenjis with her from Sudan, but all six died from distemper shots they received in quarantine.

It was not until the 1930s that foundation stock was successfully established when finally in 1936 Mrs. Olivia Burns successfully imported Basenjis to England and started breeding them.

Moreover, additional imports from Africa to England began between 1938 and 1939 before the war years interrupted the breed’s development.

It was Miss Veronica Tudor-Williams who made heroic efforts to keep the breed alive in England during the difficult times.

Basenji fanciers in the US and Canada leaped into the breed with enthusiasm from the earliest opportunity. Two of the first Basenjis were called Bakuma and Blean in 1937.

Interestingly Bakuma somehow came into the possession of early fanciers Mr. and Mrs. Al Phemister who renamed him Phemister’s Bois.

Bois became very significant in early breeding in America as he was the father of the first American Kennel Club champion. In 1941, they saw the importation of dogs directly from Africa to the United States by animal importer Henry Trefflich.

It is likely that nearly all the Basenjis in the Western world are descended from the few original imports. Moreover, the breed was officially accepted into the AKC in 1943, and in the year 1951 151, Basenjis were registered at the kennel club.

The popular movie “Goodbye, My Lady” gave a boost to the breed’s popularity and by 1957 the numbers were up to 651. In 1990 the AKC studbook was reopened to 14 new imports at the request of the Basenji Club of America.

It was believed at that time that those dogs would be the final imports. However, in 2008, the Basenji Club of America petitioned again and the studbook was open for an additional five-year period.

In 2009, 10 additional dogs, imported from Africa, were registered. Unfortunately, according to the AKC, the popularity of the Basenji in the United States has declined over the past decade, with the breed ranking 71st in 1999, decreasing to 84th in 2006, and to 93rd in 2011.

How old is my Basenji in human years?

Sharing is caring.
Help our free service by spreading information about dog breeds.
Link to this: Basenji Breed Information
<a href="https://dogell.com/en/dog-breed/basenji">Basenji Breed Information</a>
Despite the best intentions, there may be errors. If you find one, please let us know and we will fix it as soon as possible. Contact us here.