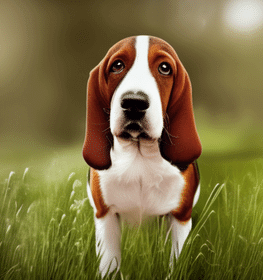 Collection of all the general dog breed info about Basset Artesien Normand so you can get to know the breed more.

The phrase "basset hound" refers to a particular breed of dog in the English language. We recognize it as a mini bloodhound with tricolor, lemon, and white markings. It is the mascot for the Hush Puppy shoe brand, and also represented in the cartoon character Droopy. The term "basset" simply refers to a dwarf hound. Dwarf dogs have shorter legs in proportion to their body size, and they are seen in a wide range of breeds. They can readily be "grafted" onto different strains through crossbreeding. Short-legged hounds are very excellent for hunting rabbits and hares while on foot, and especially if the hunter is armed. Short-legged hounds will apply pressure on the prey and push it out into the open, where it may be shot, or slow-moving hounds will apply pressure to the prey to keep the pursuit going.

Hunting with hounds became extremely popular among Europe's elite, especially Britain during the Middle Ages and still is since then. This sport became one of Europe's ruling class's most essential, if not the most significant, forms of recreation. Hunting with hounds was not only a method for the nobles to unwind, but it was also a means for them to socialize and debate political issues. Friendships and companionship formed during the hunt would frequently blossom into personal and political ties. Millions of people across Europe were affected by the decisions made over hunts. The sport was especially popular in the areas that are now part of France and in the British Isles, although until the 1870s,  there wasn’t any native British basset breed. The British sporting men used harriers and beagles to hunt hares and rabbits. These were all longer-legged dogs with a lot of stamina. A beagle pack was normally associated with the country's most prestigious boarding school. Even today, Eton has a well-known beagle pack, which was used to expose the elite's sons to the sport of sporting hounds.

Many French breeds originate in the Middle Ages or the early Renaissance. Unfortunately, little if any records were kept, thus the origins of most of these breeds will remain a mystery for the foreseeable future. The first breed in France, about official records, were kept are the Saint Hubert Hound (or Bloodhound as called in England). Their breeding program by the monks of the Saint Hubert Monastery started sometime between 750 and 900. By the end of the Middle Ages, the Saint Hubert Hound had spread throughout France and had a significant impact on the evolution of nearly all other French Hound breeds. Other French breeds, such as the now-extinct Chien Gris and the Grand Bleu de Gascogne,  also became widely dispersed and influential in France.

Northern France gave birth to a number of distinct breeds. The Normand, which originated in Normandy, was one such breed. These dogs were long, graceful, and had scrolled ears. Picardy or Chien d'Artois were the names of two additional breeds. The Artois hound (or "Chien d'Artois") earned a reputation as a great hare hound in French history. Because this section of northern France is only a short distance from England, some of these dogs are thought to be the forerunners of the contemporary beagle. But the British were uninterested in obtaining any of the basset breeds for hunting purposes. The British, on the other hand, had no interest in any of the basset breeds for hunting purposes. However, in the surrounding Normandy province, a basset breed was bred specifically for hunting hares on foot. The “Basset d'Artois” was created by grafting the basset characteristic onto the now-extinct Normand hound, and then adding the same feature to the Artois hound. Although these two breeds have now been united to become the contemporary Basset Artesien-Normand, they were once separate. The front legs of the Normand breed were crooked, whereas the Artois had longer legs.

By the 1600s, both the Normand and the Chien d’Artois were found in Basset forms. The Basset Artesien Normand was created when local breeders mixed the two breeds around those times. Other local Artesian and Norman hounds, as well as other Basset breeds, are believed to have been crossed.

Breeding of the Basset Artesien Normand became standardized in 1870 since then only the smooth-coated, short-legged modern variety of the dogs exist. Most French hound breeds became extinct or in serious numerical decline as a result of the French Revolution and two World Wars. This trend is still going on today, as hunting with hound packs is becoming less and less popular.Although the Basset Artesien Normand is still in relatively good shape from this perspective. In their homeland, the breed has long been a popular companion dog, and it is still the most popular Basset breed in France. The Basset Artesian Normand, like many other dog breeds, is today mostly kept as a companion animal or a show dog, rather than being utilized for its original role as a pack hunter.

How old is my Basset Artesien Normand in human years?

Sharing is caring.
Help our free service by spreading information about dog breeds.
Link to this: Basset Artesien Normand Breed Information
<a href="https://dogell.com/en/dog-breed/basset-artesien-normand">Basset Artesien Normand Breed Information</a>
Despite the best intentions, there may be errors. If you find one, please let us know and we will fix it as soon as possible. Contact us here.