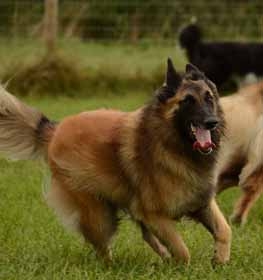 Collection of all the general dog breed info about Belgian Tervuren so you can get to know the breed more.

Belgian Tervuren As a Working Dog

One of the four Belgian Sheepdogs

The Belgian Shepherd, also known as the Belgian Sheepdog or Chien de Berger Belge, is a medium-sized Belgian herding dog. The long-haired black Groenendael, the rough-haired fawn Laekenois, the short-haired fawn Malinois, and the long-haired fawn Tervuren are produced in four unique variants based on coat type and colour. In the United States, the American Kennel Club considered the four varieties to be independent breeds. The Tervuren variety has a double coat which is typically fawn in colour with black overlay and with black extremities, although grey with black is also seen sometimes.

Belgian Shepherds, like comparable Western European breeds like the Bouvier des Ardennes, the Dutch Shepherd, and the German Shepherd Dog, are descended from a common type of herding dog, and for centuries they were employed by Belgian shepherds. Unlike in other European countries, where shepherd breeds were standardized and breeders worked to preserve their breeds throughout the 19th century, the Belgian Shepherd had become obsolete and was on the verge of extinction by the end of the century. The Club de Chien Berger Belge was founded in 1891 with the goal of preserving the kind, and a team led by Professor Adolphe Reul of the Cureghem Veterinary School conducted a field survey. Professor Reul discovered that the Belgian Shepherd type varied significantly in appearance since it had been developed for working capacity for a generation with little regard for shape. Professor Reul’s team assembled 117 specimens as part of their research and began the process of standardizing them into separate types. The Professor’s team initially divided the breed into six different varieties based on coat type and colour. Between 1892, when the first breed standard was drafted, and 1956, the Club de Chien Berger Belge recognized as few as two varieties and as many as eight varieties.

Interest in the breed grew quickly, and it became clear that the Belgian Sheepdog, despite its origins as a shepherd or sheepdog, was a versatile animal. They were easily adaptable to a range of functions because of their keen intellect and facile trainability. Moreover, at the beginning of the 20th century, they were already working with police forces in Belgium, Paris, New York City, and New Jersey. The breed was also used as security guards by European border patrols.

However, interbreeding between distinct types was prohibited in 1905, but the interruptions created by World War I resulted in a drop in breed numbers, therefor in 1920 it was decided that matings between the variations should be allowed to conserve the breed and avoid inbreeding difficulties. After the Second World War, the breed’s viability was once again challenged, and in late 1945, it was determined to encourage cross-breeding between dogs of different kinds, and the Belgian Shepherd regained in numbers through careful breeding. However, it is important to highlight that during the two World Wars, Belgian Sheepdogs distinguished themselves on the battlefields, serving as message carriers, Red Cross dogs, and defence dogs. Since then, interest in the breed has continued to grow. They are still used in police work and in search and rescue as well as guide dogs for the blind and service dogs for the handicapped. They continue to prove themselves as a truly versatile breed while still exhibiting the devotion and beauty that first attracted notice in the 19th century.

The Belgian Shepherd is recognized as a single breed with four unique types by the majority of national kennel organizations across the world, including the Société Royal Saint-Hubert and the Federation Cynologique Internationale. The American Kennel Club, for example, recognized the four variants as distinct breeds, which has caused some confusion among American breeders who breed from imported European stock. The Tervuren remains the second most popular one among the four, following the Groenendael. European Groenendaels in particular can produce Tervuren coloured puppies, which can be registered as Tervurens in most of the globe but would be disqualified in the United States.

How old is my Belgian Tervuren in human years?