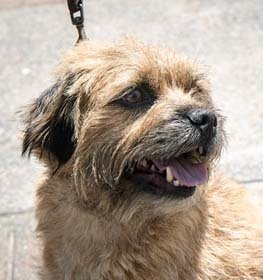 Collection of all the general dog breed info about Border Terrier so you can get to know the breed more.

Border Terrier As a Working Dog

The Border Terrier is a British breed of small, rough-coated terrier. Admirers of the upbeat and agile Border Terrier cherish their breed’s reputation as a tough, no-frills working terrier.

These friendly dogs are popular in both the city and the countryside. Their wiry coat is easy to maintain and their height ranges from 11 to 16 inches at the shoulder.

They are easy to recognize among other small terriers by their unique head shape known as an ‘otter head’.

Another distinctive feature is that their legs are longer than those of other little terriers. Moreover, Border Terriers are described as ‘hard as nails when working, but at home, they are good-tempered, affectionate, and easily trainable.

They also get along well with other dogs, but when cats or squirrels cross their way, their hunting instincts are piqued.

The breed shares its ancestry with that of the Bedlington Terrier and the Dandie Dinmont Terrier from the same area. The Border Terrier is a breed that originated during the 18th century in the rugged and at times desolate, hill territory that may be found on both sides of the English-Scottish border.

‘The Border Country’ is a nickname for this area. Farmers and shepherds in the area established the breed after using terriers to help control the local fox population.

Foxes were and still are in The Border Country, a predatory animal of particular concern to sheep farmers whose flocks wander relatively free over many thousands of hectares of heath and heather-covered land.

In the 19th century, when foxhunting developed into the sport we know today, the breed began to be used as part of the more formal foxhunting scene.

Border Terriers were built to have a long, narrow, flexible body, the better to squeeze through narrow holes and flush foxes out of their hiding places, and they have legs long enough to follow the horses during a foxhunt.

Of course, they had the stamina to spare, a weather-resistant coat, and thick, loose skin that wasn’t easily pierced by the teeth of their foxy adversaries.

However, the Border Terrier should not be too forward in attacking the fox underground, rather he should threaten them and preferably chase them out. The breed should also be able to go to the ground and follow a fox into any space in which it could go.

Furthermore, while the breed was prized in England’s border country for its fearless and implacable nature, the Border Terrier was little known outside of its home.

Many people have seen the breed at agricultural shows in Northumberland in the late 19th century, but dog fanciers took little notice of him until the early 20th century.

In 1920, he was recognized by England’s United Kennel Club, and a breed club was also formed. Moreover, in 1930, Netherbyers Ricky became the first Border Terrier to be registered in the United States when he was accepted by the American Kennel Club.

For most of his existence, the Border Terrier has been unknown and his people prefer that he stay that way if it means protecting him from the ravages of popularity. Among the 155 breeds and varieties listed within the American Kennel Club, the Border Terrier currently ranks 81st.

How old is my Border Terrier in human years?