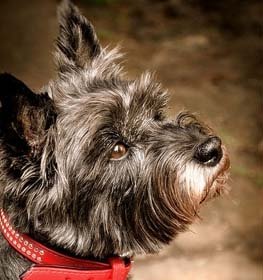 Collection of all the general dog breed info about Cairn Terrier so you can get to know the breed more.

Cairn Terrier As a Working Dog

For almost 200 years, dogs with the physical look of today’s Cairn Terriers have been recognized in Scotland’s Highlands and the Isle of Skye. The first reference of what we're most likely forerunners of today’s Cairn Terriers dates back to 1625 when King James I sent treasured examples of “Earth Dogges” to King Louis XIV of France. These dogs were so valuable that they had to be dispatched on many ships to avoid losing them all if one went down at sea.

Furthermore, prior to 1873, all terriers in Scotland were considered ‘Scottish Terriers’. In 1873, terriers were divided into two distinct varieties, the Dandie Dinmont Terrier and the Skye Terrier. In the early years, what are now called Cairn Terriers and their predecessors went by a variety of other names such as Highland Terriers, Skye Otter Terriers, and Todhunter's (fox hunters). Instead of a unique physical look and structure, these brave small terriers were appreciated and bred for their working instincts to control vermin. Moreover, Skye Terriers began to develop along numerous separate physical lines in the early 1900s, eventually separating into Cain Terriers, West Highland White Terriers, and Scottish Terriers.

Moreover, it is important to highlight a woman called Mrs. Alastair Campbell who was an early breed enthusiast who helped to establish the Cairn Terrier as a breed. She was the first to register dogs that would subsequently become Cairn Terriers and to show her dogs under the designation Prick Eared or Short-haired Skye Terriers. This caused great controversy with the Skye Terrier Club, however, the disagreement was eventually settled by granting breed recognition to the Cairn Terrier, which was accepted in 1910. A year later, the first Cairns Terrier Club was formed, and breed standards were created. Cairn Terriers get their name from the rock piles (cairns) that are a common feature of the landscape in northern Scotland and the Isle of Skye, and where they commonly find their prey.

Furthermore, it is interesting to mention that in the 1939 movie version of Wizard of Oz, ‘Terry’, a female Cairn Terrier played the role of Toto. Terry was owned and trained by Carl Spitz after she was abandoned by her original family. The original book by L. Frank Baum described Toto as ‘a little black dog with long silky hair and small black eyes that twinkled merrily on either side of his funny, wee nose’. Many experts believe that the described dog could actually be a Cairn Terrier. Moreover, Terry starred in more than 16 films. Altogether, Cairn Terriers have played in at least 73 different movies and films over the years.

Over the last three decades, the popularity of purebred dogs, in general, has diminished. Many things had impacts on the breeding of pure breed dogs, for example; the popularity of designer breeds, the vigorous marketing efforts of rescue organizations, and the wholesale importation of dogs to supply a retail rescue market, as well as restrictive anti-breeding and dog ownership legislation. The number of Cairn Terriers shown at dog shows, as well as the number of litter registrations and poppy registrations has decreased. As a breed, Cairn Terriers are at risk of disappearing altogether if action is not taken. In 2019, the Cairn Terrier Club of Canada introduced the Certificate of Breeding Quality Program as one strategy to help sustain and promote breeding.

While today, most Cairn terriers are no longer fulfilling their historic purpose, they remain independent, tenacious little dogs that love to hunt and dog. The breed became recognized by the American Kennel Club in 1913.

How old is my Cairn Terrier in human years?