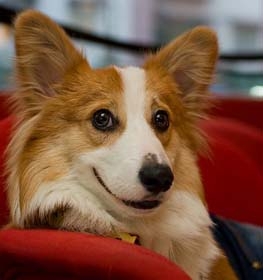 Collection of all the general dog breed info about Cardigan Welsh Corgi so you can get to know the breed more.

The Cardigan Welsh Corgi is descended from the same family of dogs that produced the Dachshund and the Basset Hound. The ancestors of modern-day Cardis are believed to have been brought to Wales more than 3,000 years ago by Celtic tribes who migrated to Wales from central Europe. This early dog was a transitional form between the Teckel and the Spitz families.

However, some people believe that when the Vikings invaded Wales, the Spitz-type dogs they brought with them were crossed with the original Corgi to produce the Pembroke Welsh Corgi. Most authorities on the subject, including both W. Lloyd Thomas and Clifford Hubbard, maintain that the first Corgis to lay their paws upon Welsh soil did so in the 12th century BCE as loyal dogs of the Celts. Such vast historical, genetic and anthropologic evidence exists to support the latter theory that the others are considered almost preposterous. Indeed, the word “Corgi” is thought to derive from the Celtic word for dog: “Concho”.

Furthermore, Cardigans were herding dogs who assisted farmers in herding their cattle and keeping them safe from predators. They also assisted farmers in transporting their cattle to the fields and to markets. They were treasured as cattle dogs, guardian dogs, family pets, and vermin exterminators. An old Welsh law imposed heavy penalties on anyone who would hurt or steal one of the dogs because they were so valuable and important to the farmers' financial well-being.

Moreover, Cardigan Welsh Corgis were first shown in English dog shows in 1919 and the English Cardigan Welsh Corgi Association was founded in 1926. At that time, the Cardigans and Pembrokes were considered one breed and often were interbred, which caused a great deal of strife among breeders. In the mid and late 1920s, a red and white dog named Bob Llwyd influenced the breed a great deal. It is stated that he was the inspiration for the first breed standards. He sired the breed’s first champion, Ch. Golden Arrow, who was born in 1928 and finished his championship in 1931. Also in 1931, Mrs. B.P. Bole imported the first pair of Cardigans into the United States. One was a female named Cassie who was already a well-established producer of high-quality Cardigans in England. Although she was mismarked, being white with brindle patches, she produced excellent pups. One of her pups, named Megan, became the first U.S. champion of the breed. Today, the Cardigan Welsh Corgi Club of America holds an annual contest for champions only, named the Megan Competition.

In 1934, the British Kennel Club declared Pembrokes and Cardigans to be separate breeds, thereby ending any questions about interbreeding the two. The next year, the American Kennel Club recognized Cardigan and Pembroke Welsh Corgis. Moreover, the Cardigan Welsh Corgi Club of America was founded in 1935. The Cardigan has gone from the Non-Sporting to the Working to the Herding Group at American Kennel Club dog shows. Because the parent club has always been committed to preventing the commercialization of their dogs, they aren’t as well-known as the Pembroke, but they always have a special place in the hearts of those who know and love them. Today, the breed standard is maintained by The Cardigan Welsh Corgi Club of America.

How old is my Cardigan Welsh Corgi in human years?

Sharing is caring.
Help our free service by spreading information about dog breeds.
Link to this: Cardigan Welsh Corgi Breed Information
<a href="https://dogell.com/en/dog-breed/cardigan-welsh-corgi">Cardigan Welsh Corgi Breed Information</a>
Despite the best intentions, there may be errors. If you find one, please let us know and we will fix it as soon as possible. Contact us here.