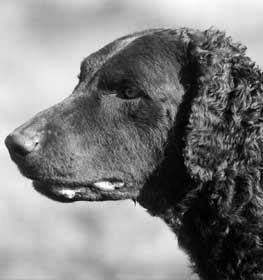 Collection of all the general dog breed info about Curly-Coated Retriever so you can get to know the breed more.

Curly-Coated Retriever As a Working Dog

Before dog shows were invented, became popular, and became the standard for evaluating dogs, the only thing that mattered was the dogs’ working abilities. The only thing that is used to characterize a retriever breed is their ability to successfully retrieve prey on command while being irrespective of their color, size, or coat type. It is widely believed that the Curly-Coated Retriever is a direct descendant of the Irish Water Spaniel and the now extinct English Water Spaniel. Both of these breeds were originally bred for the purpose of retrieving upland waterfowl and birds in England. They both had very distinguishing curls, which provided them protection from the rough climatic conditions and form the vegetation. This curly, low-shedding coat type is thought to be a result of cross-breeding one of the retriever breeds with the Standard Poodle at some point in history. Poodles also contributed to the breed’s complex character and elegant carriage. What is certain is that by the middle of the 19th century, the Curly-Coated Retriever was already a very popular breed among the English hunting community. By 1860, both the Curly and the Flat-Coated Retrievers were recognized as distinct breeds.

During the late 19th and early 20th centuries, the breed got so popular, it was imported to all parts of the world, including the United States of America, and New Zealand. The dogs quickly became especially prized and popular as a gun dog, renowned for their excellent swimming talents, perseverance, courage, and their soft mouths, which delivered any waterfowl to the hunters without breaking their skin or damaging it at all. However, in spite of the breed’s immense popularity, the Curly-Coated Retriever’s population numbers have decreased drastically due to World War I., when dog breeding and hunting fell out of focus for many. Devastatingly, by 1919, only five Curly-Coated Retriever specimens were registered in the whole world. Between the two world wars, there was a glimpse of recovery for the breed, nonetheless, the dogs almost completely died out during World War II. Fortunately, people recognized the endless possibilities in the breed, and in 1924, a planned and observed breeding program had started organized by the AKC (American Kennel Club). This was also the year when the AKC recognized the breed within their ‘Gun Dog’ category. By the late 1960s, the Curly-Coated Retriever saw a resurgence in the United States of America, for the reason that many specimens were imported from England and New Zealand to the U.S. Later, in 1979, the Curly-Coated Retriever Club of America was founded with the objectives to popularize the breed, maintain their pureness and keeping their population numbers steady.

Despite the Curly-Coated Retriever’s initial popularity, today the breed has the smallest population of any retriever breed. However, the dogs are very versatile, as they are very intelligent, they are easy to train. Nowadays, there are still some specimens who are working along with hunters as classic retrievers, but most of the Curly-Coated Retrievers are kept simply as loyal, friendly, and active family companions.

How old is my Curly-Coated Retriever in human years?

Sharing is caring.
Help our free service by spreading information about dog breeds.
Link to this: Curly-Coated Retriever Breed Information
<a href="https://dogell.com/en/dog-breed/curly-coated-retriever">Curly-Coated Retriever Breed Information</a>
Despite the best intentions, there may be errors. If you find one, please let us know and we will fix it as soon as possible. Contact us here.