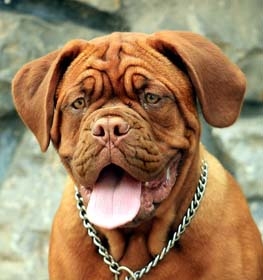 Collection of all the general dog breed info about Dogue de Bordeaux so you can get to know the breed more.

The Dogue de Bordeaux is one of the most ancient dogs, we can find in the AKC’s registry, the breed’s true origins and ancestry go back in time so far, that it is quite impossible to trace it to the very beginning.

One origin story suggests that the Dogue de Bordeaux is, as its name suggests, a French breed, which developed and evolved over thousands of years. Another theory states that the Mastiff, the Tibetan Mastiff, the Neapolitan Mastiff, and other Greek mastiff-types are the possible ancestors of the Dogue de Bordeaux. The predominant origin tale is stating that the Dogue de Bordeaux’s ancestors were introduced to France by Julius Caesar’s conquering legions during the first century B.C. These huge Mastiff-type dogs were used by the Romans, both as ferocious gladiators, who went into the ring with other wild beasts in the arena, and also as war dogs who went to battle alongside the soldiers.

One of the first written and painted artifacts of the Dogue de Bordeaux is originated from the 14th century, from France, and these records depict the dogs performing multiple different tasks. The breed was often used to pull carts, protect people and their properties, and also guard the livestock. For centuries the breed was called the Bordeaux Mastiff, which according to many documents, came in two different size variants. The slightly smaller version was called the Doguin, which disappeared around the early 18th century, due to neglect and lack of use, leaving the slightly larger variant as the breed we know today as the Dogue de Bordeaux.

As time passed, breeders started to really take the time, and plan the breeding process of the Dogue de Bordeaux, with the intention of keeping the DNA line as pure as possible. The breed standard was written up in the 1920s, but later, during the 1970s, a new standard was established, because there were minor details that changed over time. The breed was exported to the United States of America relatively late, during the 1950s. Later, during the 1980s, there were only 600 registered specimens in the whole country.

Then, when the well-known blockbuster movie, casting Tom Hanks, called Turner and Hooch came to the theatres, the interest after the breed had skyrocketed all across the world. In the movie, Tom Hanks plays a police detective assisted by his adorable, always drooling, and stubborn Dogue de Bordeaux. In spite of the breed’s long and extensive history, the UKC (United Kennel Club) only recognized the Dogue de Bordeaux in 1997, when they were widespread, and the demand after the breed was huge. Later, in 2008 the AKC (American Kennel Club) also recognized the breed finally, and today it ranks 68th among all the breeds. The steady popularity is not a surprise at all, thanks to Dogue de Bordeaux’s good personality, loyal and loving behavior.