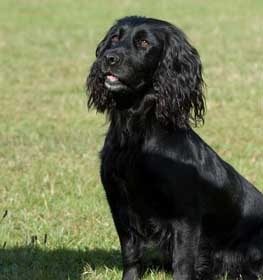 Collection of all the general dog breed info about Field Spaniel so you can get to know the breed more.

Field Spaniel As a Working Dog

Field Spaniels are close relatives of the Cocker Spaniels and Springer Spaniels and were bred to hunt game in England's wide fields first. Modern Field Spaniels are more likely to be seen at dog shows, than on the hunting ground, moreover, they were among the first breeds to enter the “showbusiness”. Although they have preserved their hunter forebears' strong activity levels, playfulness, loyalty, and intelligence, making them an excellent choice for an active family.

They were not classified by breed before becoming show dogs; instead, they were arranged by size and work purpose. Earlier distinctions have evolved into today's breeds and groups. The smallest spaniels were called 'comforters,' and they were the forerunners of today's "toy" breeds. Larger working spaniels were divided into two groups: "land" spaniels and "water" spaniels.

The land spaniels were specialized in finding and flushing small animals, such as hare and game birds, and were originally used with falcons or the net, then subsequently as gun dogs when guns were used for hunting.

Because of their specific specialization of dealing with woodcock birds, the smallest of these land spaniels became known as "cocker spaniels" in the United Kingdom and the United States.

Because of the manner larger flushing spaniels would ‘spring' or flush out the game, they were popularly referred to as "field spaniels" or "springers”. So that’s the origin of the name.

The Field Spaniel evolved into a unique breed primarily as a result of crossbreeding larger black cocker spaniels with other regional strains, particularly those larger and longer Sussex strains.

Irish Water Spaniels (for the top knot and refined head), Norfolk or English Springer Spaniels, and even the Basset Hound (for color, short crooked legs, long body length, and haw) are said to have been crossed bred with these early Field Spaniels.

Cockers and Field Spaniels were often interbred at the time, and the resulting pups were displayed in whatever classification they most closely resembled, which was usually based on weight and color.

Setting defined types and breeds became crucial all of a sudden. Crosses between a Cocker, an English Springer, and a Sussex were officially recognized as Field Spaniels at these events. These early Fields were not just show-stoppers, but also skilled hunters.

The popularity of the breed in the ring encouraged breeders to create a showy Field Spaniel with a long, low shape that was described as a "grotesque caricature of a spaniel" by a commentator. The Field's value as a gundog was diminished by such short-sighted breeding tactics, which also added health issues to the breed.

The Field's popularity waned almost as quickly as it rose, and the breed was on the verge of extinction for a while but luckily by the 60’s enthusiasm toward the breed increased so they escaped extinction. Today although they are not among the most common breeds they are represented well in Europe and the United States but they can also be found in other parts of the world.

How old is my Field Spaniel in human years?