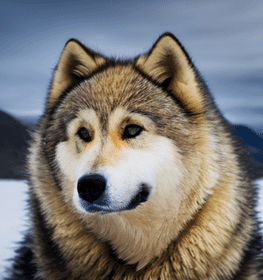 Collection of all the general dog breed info about Greenland Dog so you can get to know the breed more.

Greenland Dog As a Working Dog

12000 years ago, the first dogs arrived in America. However, people and their canines did not settle in the Arctic until the Paleo-Eskimo people 4500 years ago and then the Thule people 1000 years ago, both originating from Siberia. Around 4000 years ago, dogs first appeared in Greenland. Inuit dogs from Canada (Canadian Eskimo Dog) and Greenland (Greenland Dog) are descendants of Thule dogs, who relied on them for transportation. In 2015, a study using a number of genetic markers found that these dogs were the same dog and should not be treated as separate breeds, that they have an indigenous heritage that predates colonization and the timing corresponds with the arrival of the Thule people, and they were distinct from Siberian Huskies, Alaskan Huskies, and Malamutes. The Inuit dogs’ maternal mitochondrial DNA sequences were classed as haplotype A31, which implies a common female ancestor. This haplotype was not discovered in other modern dogs, but the closest match was a 1000 years old dog from Florida. According to a DNA study published in 2020, Greenland sled dogs have been kept isolated from other breeds since their arrival in Greenland with the Inuit people. Their lineage traces more genomic history than other arctic breeds to their ancestor’s remains which were found on Zhokhov Island, arctic northern-eastern Siberia, and dated to be 9500 years old.

The Greenland Dog is a large-breed of husky-type dog kept as a sled dog today. It is considered nationally and culturally important to Greenland and efforts are constantly in the making to safeguard its purity. It is unlawful to import any dog from outside, except for police and assistance dogs with a special permit, and all dogs must be microchipped and registered in the Greenland dog database since 2017. Such limitations do not exist in the southwest, and dog purity is not maintained. As the population has declined, a variety of projects have been launched in an attempt to preserve the tradition, knowledge, and use of dog sledding in Greenland, as well as the breed itself.

Furthermore, as we already know, for years the Greenland Dog has been used as a draught animal, and as a result, the breed has acquired a robust body and thick coat, as well as a natural capacity for load pulling and endurance in a difficult working environment. Roald Amundsen, a Norwegian explorer of polar regions, used Greenland Dogs to great success on his 1912 expedition to the Antarctic, where he became the first person to reach the South Pole. However, throughout the expedition, several dogs died as he started with more than they technically needed to pull the sleds, so he killed them along the way to use as food for the other dogs.

How old is my Greenland Dog in human years?