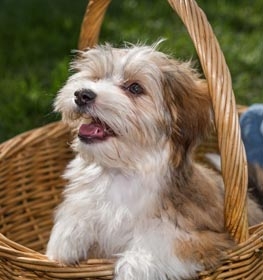 Collection of all the general dog breed info about Havanese so you can get to know the breed more.

Havanese As a Working Dog

This breed is unique in many respects and its history moreover it is fascinating is also important to define the type. The Havanese is the National dog of Cuba and its only native breed. Cuba was discovered by Cristopher Columbus in 1492 Spain colonized it in the next decades and Cuba remained a Spanish colony until the 19th century. Due to the hard trade restrictions imposed on Cuba by Spain Tenerife remained basically it's only determining trade partner and it would appear these little dogs, who soon found their way into the homes of the resident Spanish aristocracy, and developed without much outside influence. They did, however, develop adapting to the climate of this tropical island. Havanese have a unique coat thanks to which they are a remarkably heat-tolerant breed. The coat is like raw silk floss, profuse, but extremely light and soft, and insulating against the tropical rays. (Once they were called the Havana Silk Dog, or the Spanish Silk Poodle). In Cuba, the coat was never clipped for this reason, and the hair never tied into a topknot, as they believe it protects the eyes from the harsh sun.

The Havanese is the national dog of Cuba and is considered to be its only native breed. There are several written historical evidence that it was, indeed, developed there prior to the 17th century after its canine ancestors came from Spain (from Tenerife in the Canary Islands) in the early 1500s. The Havanese is part of the Bichon family, which are thought to be from the Mediterranean area in pre-Christian times, just like the Maltese, Bolognese, Bichon Frise, and the Tyetnaya Bolonka. Bichons descended from the same bloodlines that produced the Barbet, the Poodle, and many others. For centuries these small lap-sized dogs have been bred as companions to provide love for their owner. However, it is hard to know the exact origin of the Havanese as their history is drawn from guessing and possibilities rather than documented facts. The theories and stories are based on legends but all authors agree that both the Spanish and Italian have played a huge part in bringing the Havanese to the new world. In spite of all the history, most Cubans think that the breed was brought to them by the sea captains as many of them carried precious things aboard their ships to be able to give them to senoras who were married to rich businessmen. One of these precious gifts were the little Havanese puppies.

The Havanese was a beloved pet of the wealthy Cubans and later became popular among wealthy Europeans such as; Queen Victoria and Charles Dickens. Back in the 15-16-17th centuries, many antique portraits have been found and feature a companion dog that looks similar to one or another of the Bichon breeds. For example, the portrait of Frederico II Gonzaga, who was Duke of Mantua, with his small companion by his side was painted around 1525. Moreover, these little dogs were barely seen in public places just like the well-to-do women who owned them. They lived their lives in luxury, and it was said that on special occasions these women would ride through the capital in their carriages with their precious Havanese at their side. The breed was also known as “Perritos de la Falda”, meaning ‘skirt dogs’ because they were small enough to hide under their owner’s skirts. Back in those days in Cuba, the Havanese was bred but never actually sold because of puppies for gifted for favored friends in thanks to who had provided a valuable service to the family. One of the most famous Cuban breeders was Senora Catalina Laza, the wife of a wealthy baron, so we can say that her friends were lucky.

After the Cuban revolution in 1959, people who owned Havanese were the first to leave. There were only 11 dogs that were left to save the breed from extinction when the Perez and the Fantasio family reunited their forces and by the end of the 1970s the breed was being rebuilt. Later on, the Havanese was then registered with the Havanese Club of America in 1996 and also became recognized by the American Kennel Club.

Despite the trade restrictions, Colonial Cuba developed and prospered. By the 18th Century, it was the cultural center of the New World, with operas, theatres, and Palacios and an elegance that surpassed anything the British had managed in ITS colonies! The city of Havana became a touristic center and a regular holiday destination for the European aristocracy. On the way back home, they often brought back the little Dog of Havannah with themselves, which found favor in the courts of Spain, France, and England. In both Spain and in the court of Louis XVI, they were shorn in the manner of poodles and were much admired for their diminutive size. The English, on the other hand, appeared to leave them au natural, and called them the white Cuban, although they were as often found in parti-colors and shades of fawn.

By the mid-eighteenth century, they were downright trendy in Europe and the type became well established. They were usually exhibited in the early European dog shows. Meanwhile in Cuba as the aristocracy of the sugar barons was dying out and a new class was emerging, the bourgeoisie, the little dog of Havana, became a family dog extraordinaire. With the advent of the Cuban revolution, the class of Cubans who owned Havanese was the first to leave. A handful of them found their way to the USA, and by the end of the 70s, a gene pool was being rebuilt.

How old is my Havanese in human years?