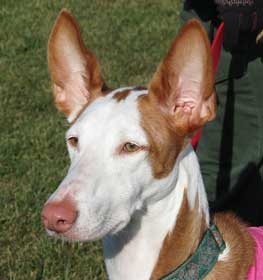 Collection of all the general dog breed info about Ibizan Hound so you can get to know the breed more.

Ibizan Hound As a Working Dog

The first impression of the Ibiza Hound is of a tall, aristocratic, sleek dog who is rather aloof but those who get to know the breed soon learn that they are generous with their affection, sensible, polite, and even playful. They are well known for being able to jump up 6 feet in the air, and they can reach speeds up to 40 miles per hour. Ibizan Hounds are also packed animals so they fit in with families just fine.

The Ibizan Hound’s origins are said to extend back at least 5000 years, making it one of the world’s oldest pure-bred canines. In Egyptian art, these dogs were frequently depicted. Tracing back to 3100 B.C., a concave dish, called the Golenischeff plate, was found at Nagada in upper Egypt, on which three leashed hounds with erect ears and tall lean bodies were portrayed.

Moreover, drawing of these ancient hounds, so strikingly similar to the Ibizan Hound, have been found in hieroglyphs and in the tombs of pharaohs dating back to 2650 B.C. Even the head of Anubis resembles that of the Ibizan. However, as their name reflects, the Ibizan Hound hails from the Mediterranean isle of Ibiza where the breed was traditionally used to hunt rabbits.

The mystery begins when the recorded history ends. How did a breed that looked as though it stepped out of an Egyptian tomb end up being discovered thousands of years later and thousands of miles away?

According to experts, it is possible that Phoenician traders may have brought these canines to Ibiza and the surrounding islands as early as 800 B.C. They were kept and bred for their capacity to hunt small creatures using their senses of sight, scent, and even hearing.

The tough conditions allowed little space for sentimentality, and those who were not physically fit were not maintained or bred. This definitely contributed to the breed’s hardiness today. The breed is known as Ca Eibisenc in its homeland.

Over time, the Ibizan Hound became known on the European continent, first in Catalonia, Spain, where he was called Eivissencs, and in Provence, France, where he was called Charnique and was prized by poachers. However, his association with the clandestine activity of poaching eventually led him to be banned from France. In the 20th century, the Marquesa de Belgida of Barcelona, Spain, Doe Maria Dolores de Cotonera took a strong interest in the Ibizan Hound, which was then considered an indigenous Spanish breed.

She maintained a big kennel on Majorca, the largest of the Balearic Islands, where she bred high-quality Ibizan Hounds whom she promoted throughout the whole world. Furthermore, it was not until the 1950s that the breed was exported and began its new incarnation as a companion and show dog. The breed was introduced to the United States in 1956 by Colonel and Mrs. Consuelo Seone. Today, the Ibizan is a prized hunter, coursing dog, show dog, and companion animal all over the globe.