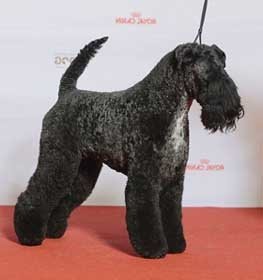 Collection of all the general dog breed info about Kerry Blue Terrier so you can get to know the breed more.

The Kerry Blue Terrier has a long and interesting history. They are one of the oldest terrier breeds and were bred in Ireland to hunt vermin. They are a versatile breed that is great for both hunting and as a family pet. They are also very easy to groom, making them a good choice for people who don't have a lot of time to spend doing it.

Kerry Blue Terriers were originally bred in the 1800s by a man named Lord Ross, who wanted to create an all-around hunting dog. The first kennel was opened around 1840 and they became very popular as hunters because of their versatility and ability to adapt themselves to different types of terrain. Although they were first bred for hunting, Kerry blue terriers are often kept as family pets because of their gentleness and good-natured personality.

Kerry Blues have a beautiful, wavy coat that doesn't require too much work to maintain. They do shed quite a bit during the springtime, but if you brush them regularly they won't leave too much hair around the house. They also have a distinctive beard and mustache that should be trimmed regularly to keep them looking neat.

Overall, the Kerry Blue Terrier is a great breed for people who want a versatile dog that is both good with children and can handle itself in the outdoors. They are easy to groom and are just as happy being a family dog as they are hunting. This breed is also very laid back, so if you're looking for an active pet that isn't too high energy then this might be the perfect choice for you!

- Kerry blues shed quite a bit during the spring

- laid back, so not high-energy pets - good with children and outdoorsy people!

- gentle, good-natured personality with a wavy coat that only requires brushing every once in a while (good for people who don't have a lot of time) makes the Kerry blue terrier a great pet for many families.

How old is my Kerry Blue Terrier in human years?

Sharing is caring.
Help our free service by spreading information about dog breeds.
Link to this: Kerry Blue Terrier Breed Information
<a href="https://dogell.com/en/dog-breed/kerry-blue-terrier">Kerry Blue Terrier Breed Information</a>
Despite the best intentions, there may be errors. If you find one, please let us know and we will fix it as soon as possible. Contact us here.