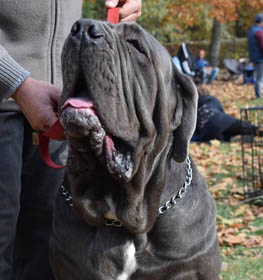 Collection of all the general dog breed info about Neapolitan Mastiff so you can get to know the breed more. 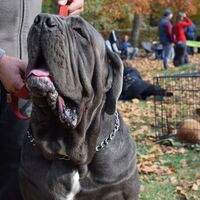 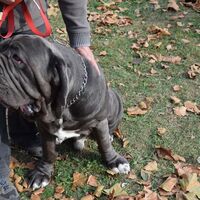 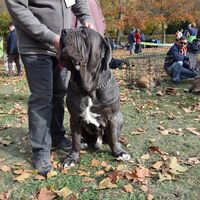 Neapolitan Mastiff As a Working Dog

Mastiff-type dogs might go back for a millennium. The Mastiffs are an ancient breed, the firsts are believed to be developed in Tibet ca. 5000 years ago as battle and guard dogs of the owner, estate, and property, for both tasks they were well suited.

The Neapolitan Mastiff was bred by farmers in southern Italy in the vicinity of Naples, after which they got their name. In the Roman Empire, they were used as war dogs, in gladiator fights, and also used as guards. The bestial looks, the huge statue was initially causing fear in their opponents, and for their advantage, the loose fold, saggy skin, massiveness, and heavyweight were protecting them in case of a serious attack.

Before the 1940s, Mastinos (as they were called locally) remained in obscurity in Italy.

In 1946 at a dog show in Naples, a journalist named Piere Scanziana took an interest in the breed and he recognized the potential in the dogs. After that dog show, the breed became one of Italy’s national treasures. Scanziana started working on making the breed better recognized, so he drew up the first standard descriptions for the breed. The dogs were named Mastino Napoletano back then. Guaglione (the name of a dog), was one of the first Mastino of Piere Scanziana, who became the first of his breed to be an Italian champion.

In 1949, the breed was recognized by the FCI (Federation Cynologique Internationale), the international dog registry. The Neapolitan Mastiff gained some popularity in Europe in the early 1970s. In 1973 Jane Pampalone was the first to import officially the breed into the United States, albeit some of the Italian immigrants brought their dogs with them in the early 1880s.

The American Kennel Club officially recognized the breed in 2004.

Today, in most cases they are kept as family pets, thanks to their calm, relaxing, affectionate behavior, sometimes they are called “giant lapdogs”. They are always alert and very protective which makes them great guard dogs, rather than attack dogs.

Kate Hudson, one of Hollywood’s biggest actors owns a Mastino named Bella too. Regarding their pop-culture representation, a Neapolitan mastiff was cast as Hagrid’s dog named Fang in the Harry Potter movie series. Another fun fact about the breed is that a Mastino holds a Guinness World Record in “giving birth to the world’s largest litter of puppies”, she brought 24 puppies into the world.

How old is my Neapolitan Mastiff in human years?

Sharing is caring.
Help our free service by spreading information about dog breeds.
Link to this: Neapolitan Mastiff Breed Information
<a href="https://dogell.com/en/dog-breed/neapolitan-mastiff">Neapolitan Mastiff Breed Information</a>
Despite the best intentions, there may be errors. If you find one, please let us know and we will fix it as soon as possible. Contact us here.