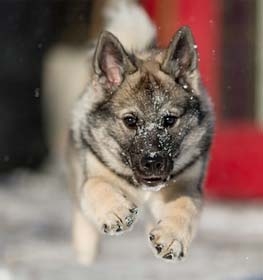 Collection of all the general dog breed info about Norwegian Elkhound so you can get to know the breed more.

Norwegian Elkhound As a Working Dog

The Norwegian Elkhound finds its origins in the rugged country of Norway. The breed can be traced back to almost 5000 BC, dogs similar to the Elkhound were used by the Vikings. The breed was a shipmate of the Vikings, they used them to herd the flocks, protect them from wolves and bear, to guard the remote villages’ tribes, to hunt, and ultimately to be a companion to the tribesman. The Norwegian Elkhound had survived more than six millennia with all his Nordic traits intact.

Even though the Norwegian Elkhound’s exact pedigree is questionable, and their exact history is shredded in Norse history and myths, it is presumable, that this breed is closely intertwined with the history of mankind. According to Viking traditions, when Viking masters died, they were buried alongside their relics, swords, and their devoted companions, thus Elkhound remains were found in Scandinavia from thousands of years ago, as a testament of their importance in the Nordic culture. The name Elkhound derives from the breed’s old quarry, the giant moose, elk, and other big wild animals. The breed specialized in following the scent of these dangerous and large creatures over long distances and holding them at bay while the trailing tribesman and hunters arrived.

Unfortunately, due to the lack of record and documentation, there are just presumptions about the breed’s true pedigree. Being a Spitz, it is derived from breeds that were domesticated six or seven thousand years ago in the northern parts of Europe. Nonetheless, DNA evidence suggests that the Elkhound, such as his cousin the Finnish Elkhound, was influenced by domesticated wolves which were cross-bred with local dogs. Even though the breed has a really long history, it remained unknown outside of its native land, until 1877 when it was discovered at the Norwegian Hunters Association Dog Show. After that, the breed became more sought after both on the Scandinavian peninsula and abroad. Shortly after this, breeders started to make efforts to develop a breed standard and documentation, while also shaping the Norwegian Elkhound into a serious competitor in the show rings. In 1901, the UKC (United Kennel Club) recognized the breed, later the AKC also registered them.

Nowadays, the Norwegian Elkhound is still used as its original function in remote villages in the northern parts of Europe as an all-purpose animal, as herders, guardians, and hunters. The dogs often need to face bears, wolves, and occasionally moose. Today two types of Elkhounds are known in Norway, the Loshund and the Bandhund. The latter works more silently to lead its owner in pursuit of a scent, Whereas, the Loshund roams ahead of the hunter and keeps the large animals at bay by leaping around it, barking loudly, until their hunting companion arrives. However, the rest of the world knows the Norwegian Elkhound as a devoted, loyal, and sporty companion.

Sharing is caring.
Help our free service by spreading information about dog breeds.
Link to this: Norwegian Elkhound Breed Information
<a href="https://dogell.com/en/dog-breed/norwegian-elkhound">Norwegian Elkhound Breed Information</a>
Despite the best intentions, there may be errors. If you find one, please let us know and we will fix it as soon as possible. Contact us here.