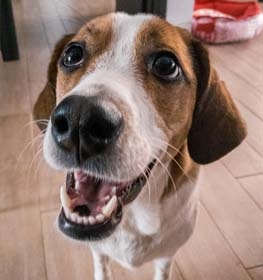 Collection of all the general dog breed info about Pocket Beagle so you can get to know the breed more.

Pocket Beagle As a Working Dog

The exact origin of the word “beagle” is uncertain however, we have a very detailed and rich historical background both for the Beagle and for the Pocket Beagle. It is presumed that it may have been derived from the Old English word “beag”, meaning small, or from the French word “beguile”, meaning open throat. Others state that it may have come from the German word “begele” which translates to scold.

The breed’s history starts at the very early ages, Greek documents from B.C. 400 describe Beagle resembling dogs. Furthermore, the Romans might have brought small rabbit-hunting hounds with them to England and bred them with local hounds to improve the dogs’ hunting capabilities. In 1066, during the Norman Conquest, William the Conqueror reportedly brought Talbot hounds, which are now extinct, to England. These dogs are considered to be the earliest ancestors of the Beagle and the Foxhound. Beagles quickly found their fanciers in England at the beginning of the Middle Ages. Between 1307 and 1327 during the reigns of Edward II. and during Henry VII. ’s reigns between 1485 and 1509, extremely small Beagles, also called Glove Beagles were more in fashion. Elizabeth I. kept packs of Pocket Beagles who stood only 9 inches tall. These small dogs were portrayed in paintings as short-legged and pointy-nosed. These dogs were mainly used for hunting, yet they quickly got replaced by the more talented and faster hound breeds.

As hunting for fox became popular in the 1700s in England, and the Beagle was displaced by the Foxhound. Thank the farmers in Wales, England, and Ireland, who continued to keep packs of Beagles to hunt hare, rabbit, and other vermin, the breed was saved from the edge of extinction. Reverend Phillip Honeywood, in the mid-1800s, established a pack of Pocket and other small-sized Beagles in Essex, England. Reverend Honeywood bred the dogs for hunting purposes, not for their looks. Yet a fellow Englishman named Thomas Johnson got included in the breeding process, his intention was to put more attention to the dogs’ exterior looks. At the exact same time in America, breeders started importing Beagles to improve their looks too. Many of these imported dogs were bred at a height of 15 to 17 inches in order to hunt fox, but American breeders wanted to make the breed smaller to better hunt rabbits. Of interest among these rabbit-hunters is the "Patch" Beagle strain, which was developed by Willet Randall in New York around 1880. In the 1940s and 1950s, they were largely widespread because they were able to run very fast.

In 1884, the AKC (American Kennel Club) recognized the Beagle, yet it does not recognize a variety called the Pocket Beagle. Technically, the Pocket Beagle qualifies as a 13-inch Beagle, which is defined by the Beagle breed standard as any Beagle that doesn't exceed 13 inches in height at the shoulder and typically weighs 15 to 18 pounds. Nowadays the Beagles got two different height classes; from 13 inches to smaller, and between 13 and 15 inches.

How old is my Pocket Beagle in human years?