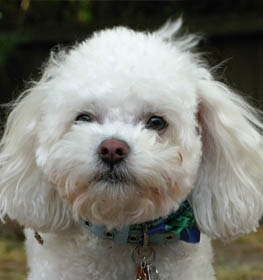 Collection of all the general dog breed info about Poochon so you can get to know the breed more.

Poochon As a Working Dog

The Poochon breed may have existed naturally over the years, but planned designer breeding programs started later. Breeders intentionally crossbred Poodles and Bichon Frises in the late 1990s, in Australia, where a breeder took into consideration the needs and wants of his dog owner clients and created dogs according to their wishes. Later then, the United States and the United Kingdom also joined the trend. Over the last 30 years, crossbreeds have become more popular, it is probable that this is the timeframe in which some breeder or fancier of these breeds, decided to cross Poodles with Bichons in order to develop a new designer dog breed. Unfortunately, there’s not really any other, more exact information about the origin of the Poochon. Like most designer dogs, no one really bothered to document their history.

Breeders’ intention was to mix the two parent breeds’ best traits, to combine the proud, intelligent Toy Poodle with the playful, adorable Bischon Frise. The result was a robust yet very friendly and hypoallergenic crossbreed. Mixing two distinct breeds can also eliminate various health problems related to pure breeds due to inbreeding. At the beginning of the 2000s, the demand for Poochons, as well as the demand for other mixed breeds, increased. Poochon is a first-generation mix, which means that their parents are always two different purebreds. These are mixed breed dogs and they are quite unpredictable- sometimes one parent’s genes will be more influential in the mix, and sometimes the puppies blend the display the traits of both Poodles and Bichon Frises. Multigenerational crossings will lead to a more uniform appearance, yet for now, there have not been any breeders to try their hand at this. It will take a while for second-generation Poochons to create a consistent, homogenous, and predictable appearance, but one day it might happen.

Even though the Poochon breed got its start as a designer breed, many of the puppies ended up in shelters or in the care of rescue groups, because the breed got to be very high maintenance. Not being pure-bred dogs, they have almost no official recognition by any big kennel clubs.

How old is my Poochon in human years?

Sharing is caring.
Help our free service by spreading information about dog breeds.
Link to this: Poochon Breed Information
<a href="https://dogell.com/en/dog-breed/poochon">Poochon Breed Information</a>
Despite the best intentions, there may be errors. If you find one, please let us know and we will fix it as soon as possible. Contact us here.