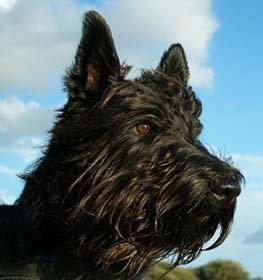 Collection of all the general dog breed info about Scottish Terrier so you can get to know the breed more.

Scottish Terrier As a Working Dog

The exact origins and history of the Scottish Terrier are somewhat undocumented and obscure, for the reason that the breed is really old. The Scottie’s origins are believed to date back to a dog that was described by Pliny the Elder, in 55 B.C. When the Romans conquered and invaded Britain, he wrote, “They found, much to their surprise, small dogs that would follow their quarry to the ground.” Then, the Romans started to call the dogs terraria, which translates into “workers of the earth” in Latin. Initially, the breed was developed to hunt foxes, rats, and badgers on the craggy Scottish Highlands, the Scottish Terrier is a venerable breed, moreover, the breed is presumed to be the oldest of the Highland Terriers, thus being the foundation dog for all the modern day’s terrier breeds. Some of the experts even call the breed the oldest variety of the canine race indigenous to Britain.

In 1436, we find a description of a small dog similar in form to the Scottish Terrier, in Don Leslie's book called A History of Scotland. By the early 1800s, many writers wrote of two separate terrier breeds in Britain, the Scottish Terrier (distinguished by its rough hair) and the English Terrier (identified by its smooth hair). Along with the Scottish Terrier’s long history, there were some controversies about its type and origin. Experts spent most of the 1800s, splitting hairs over what was a Scottish Terrier and what was a terrier that happened to be Scottish. However, somewhat earlier, in the 17th century, James I of England, a Scot by birth, exported several puppies of the breed to France as presents to the French monarch and the French nobility. Those dogs are believed to have been foundation dogs for today’s Scottish Terrier. The king's love of the dogs helped to increase the breed’s popularity among the higher ranks of society, which increased more in the next three centuries. Scotland had many terriers during the 1800s. Yet, by the end of the century, in the beginning of the 20th century, the breeds were separated into two distinct groups, the Skye Terriers and the Dandie Dinmont Terriers. The Scottish Terrier was grouped under the Skye Terriers; thus, they were shown in competitions and in rings under that class until the 1870s.

In 1883, the first litter of Scottish Terriers was brought into America by John Naylor, and two years later, in 1885, the AKC (American Kennel Club) registered the first Scottie, which was a male named Prince Charlie. Around that time, a breed standard was drawn up for the breed, which resulted in the complete distinction of the breed from the other Terriers in England.

The Scottish Terrier’s popularity reached its peak of popularity in the 1930s and 1940s. This success can be credited to the breed’s famous owners including, Humphrey Bogart and Bette Davis. The silhouette of the Scottie is a well-known expression of the Depression-era knickknacks and advertising, and the image is still popular today. The Scottish Terrier even got into the White House with its charm. History’s most famous Scottie was named Fala, the loyal companion of President Franklin D. Roosevelt during the Second World War. Interestingly, the little companion got more fan mail than other presidents did. President Eisenhower also owned two Scotties named Caacie and Telek.

How old is my Scottish Terrier in human years?