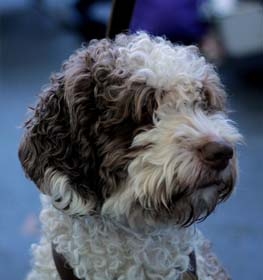 Collection of all the general dog breed info about Spanish Water Dog so you can get to know the breed more.

Those who are versed in dog breeds may think that the Spanish Water Dog is related to the well-known Portuguese Water Dog. Despite the similarities in their name, if you compare the two breeds you can see there are differences in their look, personality, and origin, too. (If you are interested in the differences between the two breeds, check out our website’s ‘Compare Dog Breeds’ option.)
The American Kennel Club (AKC) recognized the Spanish Water Dog in 2015 and they classified it as a herding breed. The Federation Cynologique Internationale (FCI) accepted it too and they categorized them as Retrievers in the Water Dog section.

When somebody sees this breed's name, their first suggestion is that this dog must love water. To understand why this breed's name contains this word we collected some information about its history. Most possibly, the breed comes from the Iberian Peninsula’s lakes and meadows, but we're not sure where they exactly originate from. We do have two theories, however. The first one says maybe they were brought from North-Africa by the Moors who occupied Spain during the 8th century. The second one claims they were brought to Spain by Turkish traders. The second theory would explain why this breed's nickname is "the Turkish dog". What we know for sure is that this breed was brought into Spain by foreigners who stayed there long enough for the breed to start to spread.

The fishermen often chose this type of dog because of their waterproof coat. This characteristic and the breed's personality were beneficial to them because they easily moved on the boat, helped to catch fish, guarded the prey, and they were not afraid of water either. Fundamentally, this dog worked as a multi-purpose farm dog, and mainly they helped in herding, hunting, and protecting their owners. Those skills which helped them with this activity still appear in their personality. They are much more loyal toward their handlers than other breeds, as well as being active and easy to train. 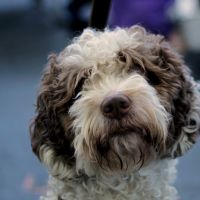