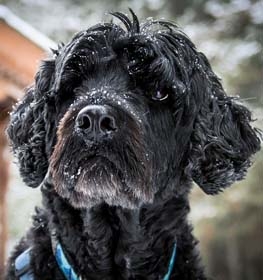 Collection of all the general dog breed info about Portuguese Water Dog so you can get to know the breed more.

History of the Portuguese Water Dog

As the name says, the Portuguese Water Dog – also known as Cao de Aqua (dog of the water) – is originated in Portugal. Once these dogs lived all along the Portuguese coast and helped the fishermen to drive fish into nets, retrieve lost tackle, and before the invention of the radio they were also used as messengers, delivering messages from one boat to another. Fishermen needed a breed that was strong, hardworking, and seaworthy and was able to swim in the ice-cold of the ocean, even near the coast of Iceland.

This breed is likely to share ancestors with the Poodle, which is not so difficult to believe if we take a closer look at them. The size of their body and their curly or sometimes wavy coat is clearly like what the Poodle has. But their history is quite different than the history of the Poodle. The very first record of this breed is from 1297 and it is written by a monk, who witnessed a dog rescue a sailor from the sea near the Portuguese coast. According to him, the dog had a “black coat of rough hair, cut to the first rib and with a tuft on the tip of his tail”. This breed also had difficulties throughout the centuries, at the beginning of the 20th century, as fishing became more and more modernized, it was on the verge of extinction and almost disappeared. Luckily, a savior arrived in the 30s, known as Vasco Bensaude, and started to use the Portuguese Water Dogs in his breeding program to re-establish the breed. His most famous dog was called Leão, and he was bred to so many different females that about half of the pedigreed Portuguese Water Dogs now living are considered to be the descendant of him.

In 1972 the Portuguese Water Dog Club of America was formed which help the rise of this breed. It was recognized by the American Kennel Club in 1983 and it is its 128th breed. Nowadays these dogs became very famous by showing their skills in performance events as well as in water and even former president Barack Obama and his family had two of the Portuguese Water Dogs called Sunny and Bo.

How old is my Portuguese Water Dog in human years?

Sharing is caring.
Help our free service by spreading information about dog breeds.
Link to this: Portuguese Water Dog Breed Information
<a href="https://dogell.com/en/dog-breed/portuguese-water-dog">Portuguese Water Dog Breed Information</a>
Despite the best intentions, there may be errors. If you find one, please let us know and we will fix it as soon as possible. Contact us here.