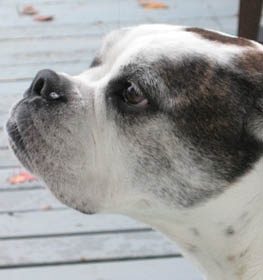 Collection of all the general dog breed info about Valley Bulldog so you can get to know the breed more.

Given their name, the Valley Bulldog is a hybrid dog breed that finds its origins in the Annapolis Valley in Nova Scotia, Canada, where the breed is still very popular and is considered to be a common companion of people. According to the breeding records, the Valley Bulldog was created in the mid-1990s, when creating designer dog breeds became fashionable and really sought after. This trend of crossbreeding purebred dogs in order to enhance their best qualities in a new breed emerged in North America, yet these hybrid breeds became so popular, that nowadays they can be found in every part of the world.

The Valley Bulldog’s ancestors are the purebred English Bulldog and the Boxer. The result was a breed that can be similar in exterior appearance both to either a small Boxer or a large Bulldog. Breeders' initial aim was to minimize or, if possible, fully eliminate multiple health-related issues with the crossing of these two breeds. Most importantly, the Bulldog’s breathing problems. Breeders also intended to develop an athletic body like the Boxer’s, and a medium-sized, loyal, stable-tempered, yet very brave-spirited companion like the Bulldog.

Regarding the two-parent breed’s history, the Bulldog is an ancient breed, that is thought to be originated from the 1500s, from Mastiff type of dogs. Firstly, the breed was used in the fighting pits, as bullfighters. Due to this forced behavior, the breed became very aggressive and unpredictable and thus, their numbers started to decline. Fortunately, breeders managed to revitalize the breed, and this time, the Bulldog landed in people’s laps as family companions. On the other hand, similarly to the Bulldog, the Boxer is also originated from Mastiff type of dogs. However, the Boxer is not that ancient, for the reason that it was developed in the 19th century, in Germany. Initially, the breed was used for guarding and protecting services. Their career did not hit any declining periods. The dogs were even employed during both of the World Wars, as carriers of messages between camps and as guarding dogs. Today, the Boxer is also working in the police. Nowadays, both of the breeds are very popular and well-esteemed.

The Valley Bulldog, just like its parent breeds, is a working dog, that is used to cattle and herding other livestock around ranches and farms. Around the Annapolis Valley in the Nova Scotia area, the Valley Bulldog still remains a great helper around the villages and is also a great family member. Even though the breed is very common in Canada, outside their native lands, the breed is considered to be a rare one. Just like the majority of hybrid breed, the Valley Bulldog is not recognized by any of the major kennel clubs yet, nevertheless, breeders are constantly working on changing that. The DDKC (Designer Dog Kennel Club) and the ACHC (American Canine Hybrid Club) both registered the breed under the name Bull-Boxer, instead of Valley Bulldog.