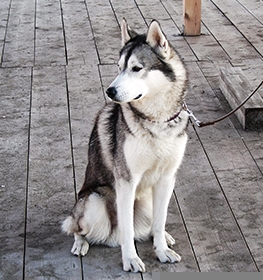 Collection of all the general dog breed info about Alaskan Husky so you can get to know the breed more.

Alaskan Husky As a Working Dog

The history of the Alaskan Husky begins with the numerous native village dogs of North America that lived in the area long before Europeans and Russians arrived. Before Colombus’s voyages, archeology has proven that there were a wide variety of dogs. There was everything from the small Innu Canoe Hunting Dogs, to Salish Wool dogs who were specifically bred for their wool to make blankets and clothing. In addition to these native dogs, common Indian and village dogs were found all over North and South America, of which the Alaskan Village dogs were a northerly version. It is from these early village dogs, more specifically the Coastal Eskimo dog and the Alaskan Interior Village dog, that the Alaskan Husky was derived.

Both the Coastal Eskimo dog and the Alaskan Interior Village dog are descendants of ancient dogs that migrated with their nomadic masters across the Bering Strait into Alaska over 14,000 years ago. For the early tribal groups of North America, these dogs were a crucial part of survival and fulfilled a variety of roles. As the early nomadic inhabitants of Alaska migrated from one place to another, the dogs were used for carrying loads in the summer and dragging goods on the snow in the winter. It is believed that early sledding technology or the advent thereof played an important role in and had the most significant influence on the development of the modern-day Alaskan Husky. The advent of sled led to small village competitions as local tribesmen wanted to know who had the fastest dog. They began to breed these early sled dogs purposely for strength, endurance, and speed, as well as hunting ability.

Furthermore, besides the ancient breeds, genetic studies have proved a close relationship between the Alaskan Husky, Siberian Husky, and the Alaskan Malamute. However, the Alaskan Husky shows more evidence of cross-breeding with dogs which were later imported to the continent by European settlers. Other breeds implicated in its development include Greyhound, Saluki, and German Shorthaired Pointed, which may go some way toward explaining the slender profile and generally low proportion of body fat in the Alaskan Husky when compared with other Arctic breeds. Today

The Alaskan Husky developed along distinct lines, bred for different features, some for strength, but most for speed and endurance. Due to their lean physique, they are known to require more care and attention than other, similar breeds, but their superior athleticism ensured that Alaskans remained the preferred choice of many ‘mushers’, frontiersmen who relied on their dogs not just to era a living but for their survival. Although the Alaskan Husky is still used to deliver freight in some Northern villages, today’s mushers are mostly competitive sledders.

As a result of the considerable variety in its look and other features, it is not recognized by any of the kennel clubs, but its continuous popularity as a working dog appears to ensure its survival.