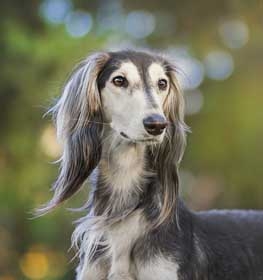 Collection of all the general dog breed info about Saluki so you can get to know the breed more.

Saluki As a Working Dog

The Saluki, in the past also known as the Persian Greyhound or the Gazelle hound, is considered to be one of the most ancient of breeds and also the oldest purebred in the world. According to experts recent genetic evidence confirms this to be the case as well. Scientists calculated that the Salukis and other ancient breeds descend from the first dogs and made their way through the world with their nomadic owners. Descriptions of dogs who looked like Saluskis, with a Greyhound-like body and feathering on the ears, tail, and legs, appeared on Egyptian tombs dating back to 2100 B.C. over 4000 years ago. Evidence was also recovered from the Sumerian Empire 7000 B.C., cravings of dogs identical to the modern Saluki. Moreover, even more, evidence was found in Egypt, that Pharaohs hunted with Salukis partnered with falcons, the same exact hound appearing on the Egyptian tombs of 2100 B.C. The dogs were often mummified after death as they were honored. The remains of dogs have been found in the tombs of the upper Nile.

Some cynologists believe that there are Biblical references to the breed, and some interpret that the Koran has described them as sacred gifts from Allah. People confirmed that it is true that Salukis were regarded as “clean” by Muslims for centuries. They were allowed to touch them and let the dogs live in their homes, including women’s quarters. Tradition held that one never sold a Saluki, but the breed was only gifted to very special persons in exchange for wives, horses, or camels. Some people believe that the breed may take its name from the ancient city of Saluk, in Yemen, others believe that the name is the translation of the Arabic word for the hound.

Salukis were very widespread in the Middle East and could be found in Persia, Syria, Palestine, Anatolia, Mesopotamia, and Arabia. Nomadic people and the tribes that developed this breed took their Salukis with them from the Sahara to the Caspian Sea. Local weather and terrain led to several natural variations in the breed’s coat, size, and type so Salukis that was eventually imported to Europe came from many different old original types. The first documented case of the breed arriving in Britain was in 1840, but it wasn’t until after World War I when many British officers returned with dogs from the Middle East that the breed became established in Great Britain. At the time they were known as Persian Greyhound, though some circles called them Gazelle Hound. The breed especially got more notice when Lady Florence Amherst imported a pair of Arabian Salukis from the kennels of Prince Abdulla in Transjordania to Norfolk, England in 1895. The same year that the Kennel Club of England recognized the Saluki and adopted the first breed standard, the Saluki/Gazelle Hound Club of England was formed, in 1923. Interest in the breed was slower to take hold in the United States. Four years later the Saluki Club of America was formed, and the American Kennel Club officially recognized the breed as a member of the Hound Group. The first Saluki registered by the AKC was Jinniyat of Gerevel in 1929. Today the Saluki is a rare treasure ranking 116th among the 155 breeds recognized by the AKC. Overall they are excellent dogs, they rely on their eyesight, rather than their noses, to find the prey, and then they use their speed for the chase and capture. However, because they are too fast for humans to keep up with, they work alone which has given them an independent personality.

Sharing is caring.
Help our free service by spreading information about dog breeds.
Link to this: Saluki Breed Information
<a href="https://dogell.com/en/dog-breed/saluki">Saluki Breed Information</a>
Despite the best intentions, there may be errors. If you find one, please let us know and we will fix it as soon as possible. Contact us here.