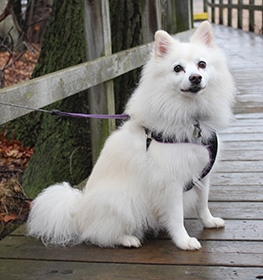 Collection of all the general dog breed info about American Eskimo Dog so you can get to know the breed more.

The American Eskimo Dog, also known as the Eskie, is a Spitz-type of dog, which finds its origins in Germany. However, the breed’s true ancestry and development are quite unclear. Regarding their Spitz heritage, they are Nordic dogs, with fox-like appearances, small pricked ears, profuse coats, and carried-up tails.

The Eskie’s ancestors were brought to America in the 1800s, by German immigrants. Spitz-type of dogs were commonly found in the German immigrant communities. These early dogs were employed as all-around helpers in the farms.  The American Eskimo Dog is thought to be originated from the German Spitz, deriving this conclusion from their place of birth. Presumably, other breeds were also involved in the development process of the Eskie, including the Pomeranian, the Italian Spitz, and the Keeshond. By the beginning of the 19th century, as dog shows and hobby pet keeping was emerging, as a style, it became impossible to keep these eye-catching dogs solely for working purposes on the farms. The breed’s enthusiasts started to show the breed on dog shows, showcasing the Eskie’s agility, and beautiful physical attributes. At that time, traveling circuses were very popular in the United States. The American Eskimo Dog became known as the ultimate circus entertainer in the 19th century, with their astonishing abilities to perform tricks. The Eskie stole everyone’s hearts after dancing to music with clowns at the Barnum and Bailey Circus. The breed also got a huge popularity boost, when a specimen, named Pierre, in 1930, became the first dog to walk across the tight rope several feet up in the air.

Today, in spite of the American Eskimo Dog’s long history, many major kennel clubs still do not recognize the breed. Moreover, some owners still compete their Eskies in international championships as German Spitzes, even though these two breeds have not been considered the same for a very long time now. Today, the breed comes in three varieties in size; the standard, the miniature, and the toy, but usually they are all white-coated. Originally the Eskie had multiple color variations, but breeders always preferred the dogs with the white coat, thus with selective breeding, they managed to build the breed standard around a white dog. Nowadays, the Eskie is still a popular choice by families, who are looking for an intelligent and fun companion.

How old is my American Eskimo Dog in human years?

Sharing is caring.
Help our free service by spreading information about dog breeds.
Link to this: American Eskimo Dog Breed Information
<a href="https://dogell.com/en/dog-breed/american-eskimo-dog">American Eskimo Dog Breed Information</a>
Despite the best intentions, there may be errors. If you find one, please let us know and we will fix it as soon as possible. Contact us here.