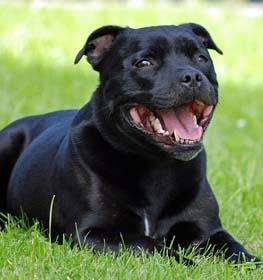 Collection of all the general dog breed info about Staffordshire Bull Terrier so you can get to know the breed more.

The breed is among the terrier group of the AKC (American Kennel Club), such as the Bull Terrier and the American Staffordshire Terrier, they both classify as a bull type of dogs. This connection suggests a common line of ancestors as well, moreover, both of these breeds probably share the same backstory more or less. In England, a couple of centuries ago, when betting on dog-oriented blood sports was in style, gamblers have developed ferocious to excel in these ghastly affairs. The first predecessor of today’s bull types was the Bulldog, created for the terrifying spectacle of bullbaiting. The breed can be traced back to the Mastiff-like dogs through the old Bulldog which, when crossed with British Terriers, produced the first „Bull-and-Terriers”.

Later, the Staffordshire Bull Terrier was created in the early 19th century, to be faster, stronger, and smaller in the fighting ring, although, to be friendly, kind, and gentle towards people, in order to serve as a companion as well. The breed was most likely developed by crossing the Bulldog with an ancestor of the Manchester Terrier. From among the profusion of breeds developed in this way are most now extinct. The Staffordshire Bull Terrier was perfected by a breeder named James Hinks, in Birmingham, in the mid-19th century, emerged as one of the most successful and enduring. The breed name that finally came to these burly, broad-skulled terriers is a nod to the county of Staffordshire, where the breed was especially well-known. In 1835, blood sports got outlawed, however pit-dog fighting continued as an underground illegal activity for the satisfaction of the poorer classes of society. In these illicit pits, usually housed in a cellar dogs would either fight against one another or would be set against a sack full of rats. In 1835, a breed standard was born and, thus the first Staffordshire Bull Terrier Club was formed in England.