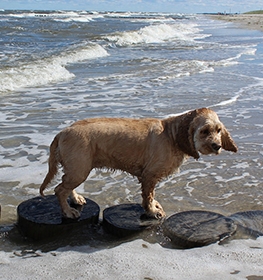 Collection of all the general dog breed info about American Water Spaniel so you can get to know the breed more.

Whatever his family background is, we know for sure that it was bred to be a versatile hunting buddy. It was frequently used by the market hunters of the day to help harvest all manner of game, but as the folklore says, most notably waterfowl harvested in the Great Lakes Region. In fact, even today, one will find the majority of the American Water Spaniel owners and breeders in Wisconsin, Michigan, Minnesota, and the surrounding states. Moreover, American Water Spaniels are active dogs that will do best when given the opportunity to work off some of their energy, so they are excellent hunting dogs. Their dense, curly coat helps to protect them from the cold water as well as from briars in the woods. Standing about 15-18 inches at the shoulder and weighing in between 24-45 pounds, the breed is considered a medium-sized sporting breed. His medium-size allows waterfowl hunter to take him in a little boat or canoe and he will tenderly retrieve grouse, quail, pheasant, and ducks. The breed sticks close to his human rather than ranging far afield. Hunters along the Mississippi flyway and its northern tributaries often used the breed, taking advantage of the dog’s ability to work in varied from mashes to uplands, his endurance, and his ability to retrieve many birds in a day. However, when larger retriever breeds from England became popular, the little brown spaniel began to fall out of favor. Fortunately, in the early 1900s, Doctor Pfeifer of New London, Wisconsin, was the first to recognize that the little brown spaniels, so well-known in his area, were actually a distinguishable breed. He believed that the breed should be recognized and preserved. He led an effort to gain recognition of what would eventually be called the American Water Spaniel by petitioning the dog registries to recognize the breed. Pfeifer bred and sold American Water Spaniels, formed a breed club, and helped to develop a breed standard. Through his efforts, the breed was recognized by the United Kennel Club in 1920. Over the following years others took up his cause and the breed was eventually recognized by the Field Stud Book in 1938 and the American Kennel Club in 1940. It is important to highlight that it was one of Pfeifer’s own dogs, ‘Curly Pfeifer’, who was the first registered American Water Spaniel.

The American Water Spaniel remains rare, but this rarity has probably saved the breed from splitting into two groups, one used for dog show competitions, and the other to continue the breed’s traditional job as a hunting companion, as seen in some other retriever breeds.

How old is my American Water Spaniel in human years?

Sharing is caring.
Help our free service by spreading information about dog breeds.
Link to this: American Water Spaniel Breed Information
<a href="https://dogell.com/en/dog-breed/american-water-spaniel">American Water Spaniel Breed Information</a>
Despite the best intentions, there may be errors. If you find one, please let us know and we will fix it as soon as possible. Contact us here.