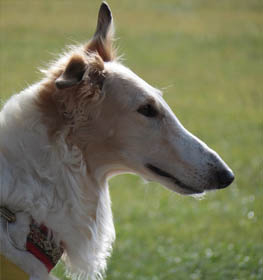 Collection of all the general dog breed info about Borzoi so you can get to know the breed more.

One of the seven distinct breeds known as sighthounds, the Borzoi, according to some sources, is believed to have originated from a cross between a Saluki type dog and a native Russian breed, bred by the Russian aristocracy, in the 13th century and were required to hunt wolves in very cold climates. Other sources maintain that the Borzoi came from an Asiatic dog that came into Russia hundreds of years ago and over time evolved into today’s Borzoi. Apparently, their history dates back to 1260 A.D. but whatever is the exact origin of the breed, the first written description or standard did not appear until 1650. The first Borzoi model was documented in a book dealing with hunting rules. At that time, there was a huge focus on hunting dogs and countess serfs took care of the dogs on large estates. Moreover, the hunts were always grand occasion and hounds, beaters, and hunters were brought and even the Grand Duke and the nobility attended. More than a hundred Borzoi took part in the hunt. When the wolf was sighted, the huntsmen released their dogs to capture, pin, and hold it. After they ceremoniously bound and gagged the world and the huntsmen sometimes set it free to be hunted again another day. These hunting games were popular until 1861 when the emancipation of serfs started and nobles could no longer rely on their work. This led to nobles slowly losing their power, moving to cities, and abandoning their kennels. Many dogs were left behind, destroyed but some were taken in by the newly freed citizens. By 1873, a few Borzoi remained and the Russians created the Imperial Association to protect and promote the breed’s characteristics. The association’s members included Grand Duke Nicholas, the uncle of Czar Nicholas II, and other wealthy landowners. Unfortunately, this association with the aristocracy was lethal. During the Russian Revolution, many Borzoi were slaughtered and it almost drove the breed to extinction. The only reason why the breed did not go extinct is that many had been given as gifts to royals in other countries or had been imported by people interested in the breed. For example, the first Borzoi known to have left Russia was a pair given to Queen Victoria by the Russian Czar. Prince Edward was also given a pair that produced puppies later shown at British dog shows. At that time the breed was called ‘Russian Wolfhound’ which didn’t change until 1936.

The First Borzoi that was imported to the USA was names Elsie, bought from Britain by a Pennsylvanian man called William Wade. Another American, C. Steadman Hanks, personally visited Russia in the 1890s to take home a Borzoi and establish his kennel. The AKC recognized the breed in 1891 and in 1903 the Borzoi Club of America was founded as the “Russian Wolfhound Club of America”. In the USA, this breed became famous as a glamorous dog that accompanied the movie stars.

Photo Gallery of the Borzoi Breed 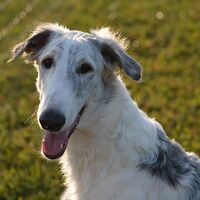 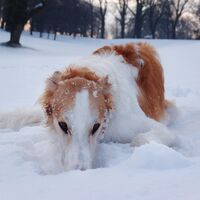 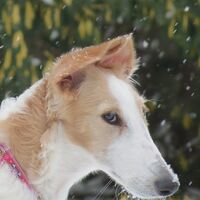 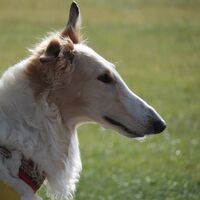 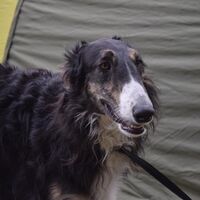 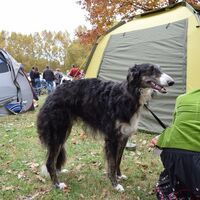 Sharing is caring.
Help our free service by spreading information about dog breeds.
Link to this: Borzoi Breed Information
<a href="https://dogell.com/en/dog-breed/borzoi">Borzoi Breed Information</a>
Despite the best intentions, there may be errors. If you find one, please let us know and we will fix it as soon as possible. Contact us here.