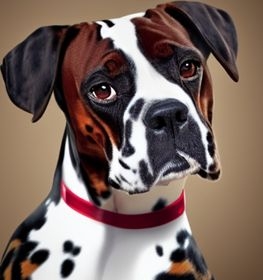 Collection of all the general dog breed info about Boxmatian so you can get to know the breed more.

Boxmatian As a Working Dog

First of all, the Boxer’s ancestors, the Assyrian Empire’s military dogs, dating back to 2500 B.C. However, the modern definition of the Boxer can be traced back to Germany in the late 19th century. The breed is thought to have been bred down by German dog fanciers from a large, heavier German breed called the Bullenbeisser, meaning ‘bull biter’. The Bullenbeisser was Germany’s premier big-game hunter in medieval times, with noblemen using it to track down, catch, and keep dangerous opponents like a bear, bison, and wide boar on huge ducal estates. However, by the early 1800s, the political situation in the German states was changing. German nobles were out of favor. Their estates were divided, and the beloved tradition of lavishly appointed boar hunts came to an end. The Bullenbeisser had lost his post by 1865. Through judicious crosses to a smaller, mastiff-type breed from England, the obsolete big-game hunter gained a new lease on life. By the late 19th century, the modern Boxer had emerged as a sleeker, most elegant dog. Over the years, Boxers have done many jobs including athlete, cattle dog police dog, war dog, watchdog, protection dog, and guide dog for the blind. The American Kennel Club registered its first Boxer in 1904, but the breed’s popularity began in the 1950s when a Westminster-winning Boxer named Bang Away became a national celebrity. Since that time, Boxers have reigned as one of American’s top 10 most popular breeds.

The other parent breed, the Dalmatian is probably known by everyone, as the breed is best known as the star of Disney’s 101 Dalmatians. However, the Dalmatian’s origins are unknown. The spotted dogs are known to have traveled with the nomadic bands of Romanies, sometimes called Gypsies, and it is unknown where they may have first appeared. The Dalmatian obtained his name during his stay in Dalmatia, a province on the Adriatic Sea’s eastern side that is today known as Croatia. Throughout their lengthy history, Dalmatians have been used for a range of jobs, never specializing in one area. They were used as guard dogs, shepherds, ratters, retrievers, circus dogs, and coaching dogs in Dalmatia. Furthermore, it was in England that the Dalmatian was developed as the ultimate coaching dog. The breed was trained to clear a path in front of the horses, run beside the coach, or under the coach between the axels. When the horses and coach were resting, he kept an eye on them. To this day the Dalmatian has always had a natural affinity towards horses. However, this affinity took the Dalmatians on a different career path in the United States. The breed became a firehouse dog, running with the horses to the fire, watching over the equipment during a fire, and sometimes even helping and rescuing people from burning buildings. When the excitement was over, they accompanied the fire wagons back to the station and resumed their duty as watchdogs. Dalmatians are companions and family members but many firehouses still have Dalmatians as mascots.

The Boxmatian has become known as a popular designer dog breed. The breed is large, but exact size standards might vary as is always the case with newer mixed dog breeds. The breed is one of the most energetic dogs around and they are generally considered to be healthy.

How old is my Boxmatian in human years?